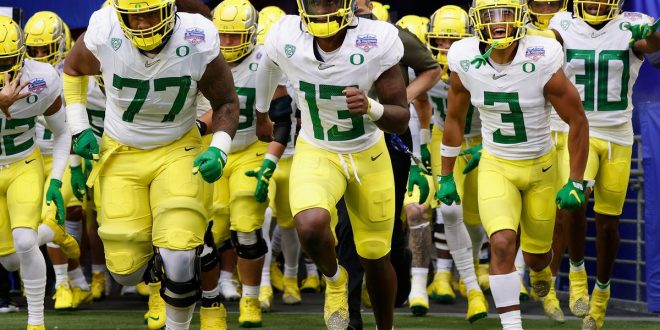 Oregon moves into playoff spot after debuting No.4 in CFP ranking

Oregon head coach Mario Cristobal has led his team to a College Football Playoff position. After impressive wins over No. 5 Ohio State and over No. 25 Fresno State with a PAC-12 schedule, the Ducks were able to leapfrog over the undefeated Cincinnati Bearcats.

Oregon leap-frogged Cincinnati to take the four spot despite the AP poll ranking Cincinnati No. 2 and Oregon No. 7. The college football playoff committee cited the Ducks as having more impressive wins and the win over Ohio State as especially impressive.

Looking ahead at Oregon

To begin the final leg of the season, Oregon will travel to the 4-4 Washington Huskies for a 7:30 matchup on Nov. 6. The Huskies are coming off two straight wins. This will be the Huskies’ biggest game of the season as they have a chance to ruin the Ducks season if they can pull out a win at home.

This will be the first meeting since 2019 between the Huskies and Ducks. During the COVID-19 pandemic, an outbreak broke out in the Washington locker room which lead to the game being canceled. This game will be interesting because Washington beat Stanford last week. Oregon suffered their only loss of the season to Stanford on Nov. 2.

Washington has relied on low-scoring games and defense to win them games, holding opponents to 18.9 points per game. On the other hand, Oregon has won with the offense averaging 36.1 points per game and 443.1 yards per game.

The Ducks have relied on a strong ground game headlined by Junior running backs Travis Dye and CJ Verdell. These two with the help of dual-threat senior quarterback Anthony Brown have been the catalyst for Oregon’s 205 yards per game on the ground.

The Huskies may look to slow the Oregon rushing attack with their front four headlined by NFL prospect Zion Tupuola-Fetui. Last week, Tupuola-Fetui made his return from an Achilles injury suffered last year and played nearly every snap.