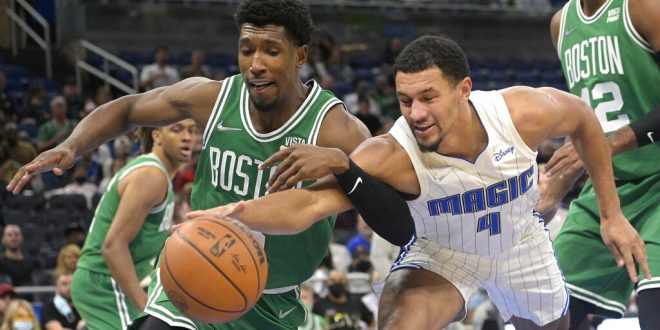 The Orlando Magic (2-7) lost to the Boston Celtics (3-5) Wednesday 92-79. The game marked Boston’s seventh consecutive win against the Magic spanning over the last three seasons.

The Magic came out strong in the first half, a similar sight from their dominant fourth quarter performance against Minnesota on Monday. They were precise in their shooting and played with great energy, taking a 46-44 lead going into the half. The momentum didn’t carry through halftime, however, as the Magic would score a season-low 79 points by the final buzzer.

Orlando missed their first ten attempts in the second half and turned the ball over three times. They were held scoreless for six minutes and 44 seconds of play, during which Boston scored 21 points. The Magic scored 28 points in the opening 12 minutes, but scored just 33 points the entire second half.

Wendell Carter Jr. finished with 13 points and 13 rebounds, one of four Magic players to score double digits. Cole Anthony followed with 13 points and five rebounds. The Magic made a slight comeback in the fourth quarter with 23 points, but came up short and remain winless at home.

“In that third quarter, we got frustrated when none of our actions were working,” Carter said. “We were taking the first shot instead of getting to the second side. That’s immaturity.”

Boston snapped its three-game skid and got back in the win column due to a strong third quarter performance. An 18-1 run to start the second half propelled the Celtics to victory. Jaylen Brown recorded a team-high 28 points, along with five rebounds and three assists. Jayson Tatum (14 points, six rebounds) and Al Horford (12 points, 12 rebounds, seven assists) combined for 26 points.

Jaylen Brown (@FCHWPO) leads the way with 28 PTS in the @celtics win ☘ pic.twitter.com/LiYHusFXgQ

Al Horford: “We talked about coming out, setting the tone on the defensive end, and having that right energy. And I feel like everybody was very connected in doing the things we needed to do.”

Orlando continues its five-game homestand on Friday against San Antonio. The Magic will to look to rebound against the Spurs after losing 123-97 on Opening Night. Boston will travel to Miami to face the Heat on Thursday.