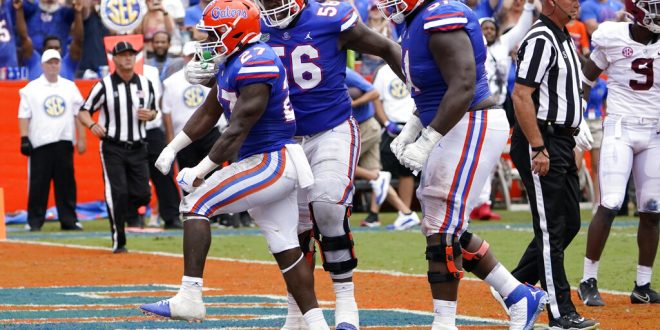 Coming off a tough loss last Saturday against South Carolina, Florida had not only fans, but previous head ball coach Steve Spurrier, questioning how the rest of the season will play out. However, running back Dameon Pierce looks to finish Florida’s season strong.

Steve Spurrier on @ESPNGainesville today: “That performance at South Carolina was embarrassing. We all know that.”

Gators running back Pierce said he hopes his teammates and him can “try and get close as a team” to salvage the remaining three games left of the 2021 season.

Pierce acknowledged fans disappointment after the last few loses, and how him and his team see themselves moving forward. “We have to try and find a way to keep all of the outside noise, outside, exactly where it’s out and focus on everybody internally,” Pierce said.

On Monday it was announced that Florida had fired defensive coordinator Todd Grantham and offensive line coach John Hevesy. Both Grantham and Hevesy came to Florida from Mississippi State in 2018-the same time as Mullen.

After hearing the news about their layoffs, Pierce said it was “difficult” and like “losing a bestfriend.”

Despite losing members of Florida’s football program, Pierce is optimistic for the rest of the season because he will be playing the sport he loves.

Looking Forward to the Future

This Saturday, Nov. 13 Florida will face off against Samford at home. Kickoff will be at noon.

It has also been reported that head coach Dan Mullen expects quarterback Anthony Richardson to return for Saturday’s game. This is following an accident that happened that resulted in Richardson getting a concussion.

The much-anticipated game for Gator Nation will have fans on the edge of their seats to see if Florida can get out of their losing streak.