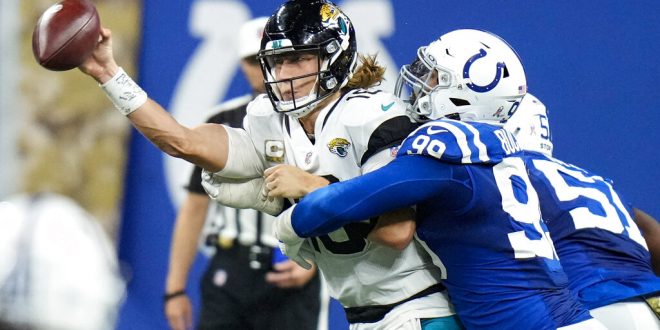 Jaguars Fall to Colts on the Road

Coming into Week 10 of the NFL season, the Jacksonville Jaguars were working off back-to-back wins heading into this AFC South matchup against the Indianapolis Colts. But despite a hard fought effort, early mistakes and the Colts’ rushing attack was too much for the Jags to handle.

One too Many Mistakes

Within the first ten minutes of the game, the Jaguars were on the wrong side of a blocked punt returned for a touchdown. The Jags then found themselves down 17-0 before a massive 66-yard touchdown rush by wide receiver Jamal Agnew. This would be one of only two first half scoring drives for the Jags. All other first half drives ended in punts.

In turn with a not-so-great passing performance by Jaguars quarterback Trevor Lawrence, Lawrence’s two fumbles and one lost fumble on the team’s final possession would cost the Jaguars the game. Lawrence was admittingly surprised at the outcome of this game.

“I thought we were gonna win that game,” Lawrence said.

In perfect synchronicity with its defense, the Colts rushing attack completely dominated the Jaguars. Colts lead running back, Jonathan Taylor, scorched the Jaguars defense. Taylor rushed 21 times for a total of 116 yards and a touchdown to top it off. Taylor notched the only offensive touchdown for the Colts.

After two hard fought wins in the prior weeks, some could say the Jaguars still have some momentum left in them for the latter half of the season. But after falling to the Colts on the road, the Jaguars are now home for the next two games. And on the other hand, the Colts will now be traveling to Buffalo to face the Bills, who are currently second in the AFC.