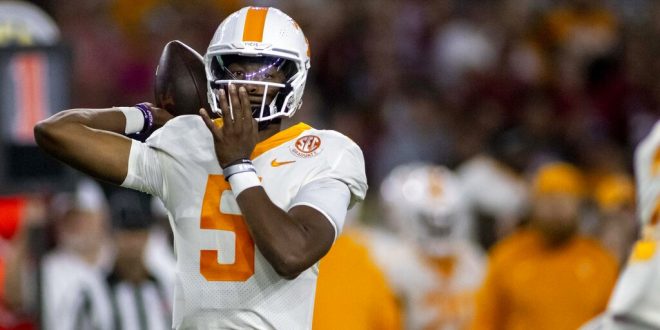 Tennessee quarterback Hendon Hooker throws a pass against Alabama during the first half of an NCAA college football game Saturday, Oct. 23, 2021, in Tuscaloosa, Ala. (AP Photo/Vasha Hunt)

All is well on good ‘ole Rocky Top.

In January, the Tennessee Football program dealt with crisis. On Jan. 18, the school announced it had terminated head coach Jeremy Pruitt’s contract following a slew of NCAA recruiting violations. With the program in disarray, newly hired Athletic Director Danny White looked to a familiar face. Following his success at UCF, the AD brought in the man he hired in Orlando back in 2018, Josh Heupel.

From there, the Volunteers haven’t looked back. While the beginning of 2021 saw the program in shambles, the end of the year sees a sense of hope throughout Knoxville. On the season, Heupel’s team sits at 5-5, with an impressive win over No. 18 Kentucky. Sitting at .500, the team looks to continue its momentum against South Alabama. With two games left in 2021, the coach discusses the growth he’s seen from his team.

The magic number is one.

After missing a bowl in the 2020 season, the Volunteers are one win away from bowl eligibility. A tremendous feat considering where the program sat in January, Heupel has two chances against South Alabama and Vanderbilt to get the coveted sixth win.

Saturday is another chance to secure bowl eligibility. But, if the Vols’ are to stump South Alabama, it will be fueled by strong defensive play. Conversely, the Tennessee offense has been firing all season. Yet, the defense ranks just No. 97 in total defense nationally. However, the team is 4-0 when it has allowed less than 25 points, showing the possibilities of when this unit is at its best. Tim Banks, the defensive coordinator, has been nominated for the Broyles Award, which is awarded to the country’s top defensive coordinator each season. Heupel discusses his assistants success in year one.

Banks’ defense will be seeing South Alabama short-handed. On Nov. 6, former South Carolina quarterback Jake Bentley suffered a torn MCL. From there, backup-QB Desmond Trotter has become lead man for the Jaguars. In the start against Troy Saturday, he threw for 238 yards along with a touchdown and two interceptions. Heupel is aware of the QB switch for his opponent, and knows it’s something to monitor.

While the offense has been strong in 2021, led by transfer Hendon Hooker, the Vols’ will always have one advantage at home. Neyland Stadium has returned to the mayhem-seeking asylum days of old. With a capacity of 102, 455, the Tennessee faithful bring out the orange and white harder than ever due to the excitement from year one of Heupel. With energy returning to the home field, the head coach knows there’s a twelfth-man on his teams’ side Saturday.

The Vols’ are currently 28-point favorites over the Jaguars. With another strong day from Hooker and the offense, Tennessee can cover this spread. But, the defense will need to take advantage of a young QB prone to mistakes. This game presents a big opportunity to gain momentum headed into rivalry week v. Vanderbilt. Look for Tennessee to make a statement and gain bowl eligibility for the first time since 2019.

Sam Petosa is a Journalism major pursuing a Specialization in Sports and Media at UF. The South Florida native produces daily shows for WRUF, including "Sport Scene with Steve Russell, and "The Tailgate." In addition, Sam provides weekly sports updates for WUFT News and radio Sportscenter's for WRUF radio. Sam has been a writer at ESPN Gainesville since January 2020.
@sampetosa5
Previous Jaguars host 49ers in Sunday matchup
Next Florida Volleyball Looks to Extend Win Streak With Weekend Series Against South Carolina

The No. 1 Georgia Bulldogs will travel to Knoxville this weekend to go head-to-head with …