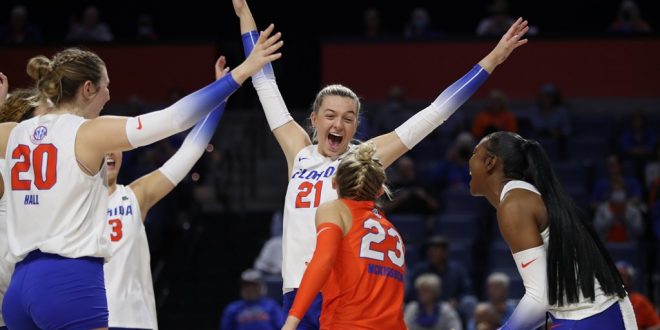 After sweeping Auburn earlier this week, the No. 20 Florida Gators (18-6, 12-2)  will host the South Carolina Gamecocks this weekend for a two-match series. Saturday’s match is set for 4 P.M. while the series finale is slated for Sunday at 2 P.M.

The Gators earned their seventh straight win this week and will be looking to extend the streak this weekend. South Carolina (14-11, 6-9) comes to Gainesville posing a big potential threat. The Gamecocks upset then-undefeated Kentucky Wildcats who are number one in the SEC and eighth overall. The Gamecocks remain the only team in the conference to take down the defending national champions down. In addition, South Carolina defeated the Gators last season in Columbia in five sets.

Head Coach Mary Wise explained that this week has been dedicated to preparing for South Carolina.

Although, the Florida Gators are bringing multiple weapons to this fight. T’ara Ceasar will lead the way for her offense as she currently holds third place in the SEC in both points per set and kills per set. In her 2021 season, Ceasar has garnered 11 double-doubles.

In addition, Marlie Monserez will continue providing for her offense as she notched her ninth double-double of the year this week. Monserez feels that the team has been more consistent and aggressive on serves.

Overall, Coach Wise expressed that she does not believe the team has peaked and that there is still more potential for improvement, which is a great thing.

“There are still areas that continue to be room for growth,” said Wise, “but to have a veteran team that has more room to improve this late in the year I think bodes well for the Gators.”

Parker Welch is a Senior at the University of Florida majoring in Sports Media at the College of Journalism & Communications.
@parkerrwelch
Previous Tennessee v. South Alabama Preview
Next No. 21 Arkansas vs No. 2 Alabama Preview