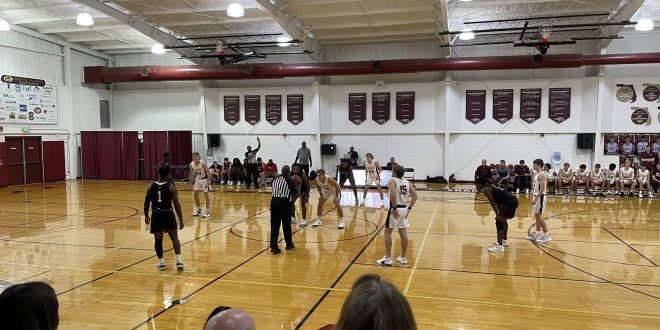 The Lafayette Hornets (2-0) traveled to Gainesville to take on the Oak Hall Eagles (0-1) in a big-time boys varsity basketball matchup. The Hornets defeated the Eagles 47-42.

The game was Oak Hall’s season opener and their first taste as to how talented their team was. They were fortunate enough to open the season in front of their home crowd.

The Eagles start their season off with a few quick points. Sophomore Andrew Powell hit two quicks threes to give Oak Hall an early lead. Defensively, Oak Hall came out in a 3-2 zone that didn’t allow Lafayette to get much action in the paint. They forced the hornets to take a couple of contested threes.

Lafayette came out in a tight 1-2-2 full-court press that caused a few Eagle turnovers. It sped their offense up and made them throw rushed passes. However, the Eagles managed to lead 15-14 at the end of the 1st quarter.

Lafayette began this quarter off with an aggressive offensive style where they attacked the basket. Their full-court press was patient and made Oaks Halls’s offense uncomfortable. Throughout much of the quarter, the Hornet’s defense led to easy fastbreak points.

In contrast, Oak Hall wasn’t playing defense with much urgency which allowed for Lafayette to pass the ball around the top of the key and have some open shots. They were able to take their time and run their sets. The Hornets took the lead and finished the half up 23-19 on the Eagles.

Oak Hall and Lafayette began the second half by trading baskets. The Hornet’s strength in this quarter was their ability to grab offensive rebounds and put them back up for easy points. They had a few of these plays to start the quarter off.

After a few Lafayette missed baskets, Oak Hall took advantage and played some great offense. They regained the lead 29-25. Senior Hamza Khuddus was great this quarter as he scored multiple baskets to build up Oak Hall’s lead. Oak Hall finished the third quarter up 36-31.

Lafayette yet again came in this quarter with great defense that gave them extra possessions to score some points. The Hornets went on a small run and regained the lead 40-39, forcing Oak Hall to call a much-needed timeout. With under two minutes left, Freshman Dakota Bower hits a clutch three to tie the game at 42 apiece. However, Lafayette comes back at the Eagles and scores an easy layup after some good passing to take a two-point lead.

With 20 seconds left and being down two, Oak Hall stole the ball from the Hornets off of an inbounds play and immediately called a timeout. They came out of the timeout and failed to score after two attempts, ending the game in a heartbreaking fashion. The Hornets won the game 47-42 to remain undefeated at 2-0. The Eagles start the season 0-1.

After a tough loss, Oak Hall comes back to play in their home gym on Friday night at 7:30 PM against Keystone Heights. The Eagles will look to fix their mistakes this week and play a more disciplined game on Friday night.