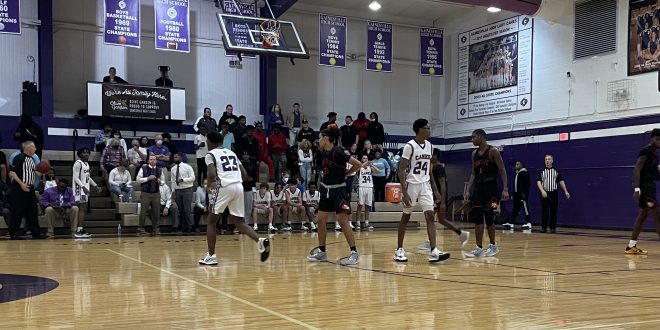 Defense Dominated the First Half

The Gainesville Hurricanes and Santa Fe Raiders both wanted to start positively on each end of the floor. However, that meant offense would come as a premium with both teams harping on defense, and that is just what happened.

Both teams had a rough time scoring in the first quarter. Neither could get the early momentum to really grab the game. Despite getting out to an early 9-2 lead in the first, the Raiders would let the Hurricanes back into the game. The Hurricanes mounted their own run to capture the lead to end the quarter up 13-12.

Gainesville’s offense would sputter in the second quarter. Through turnovers and missed shots, they were never able to find a rhythm. On the opposite end, the defense couldn’t keep their hands to themselves, fouling Santa Fe eight times in the first half.

Santa Fe, in a low-scoring affair, managed to jump out to a 31-25 lead over the Hurricanes at the half. Both teams fought back and forth, but there were no true “lighting in the bottle” moments that allowed for a team to break away this half.

Neither team’s offense really clicked in the third quarter. Turnovers, missed shots, and fouls, once again, highlighted the third. Both teams struggled to grab the bull by the horns and pull away from the other.

For most of the third, the Hurricanes hung around through pesky defense. Through doubling the opposing ball-handler and really sitting down on this side of the ball, they clawed their way back into the game as they narrowed the deficit to two by the end of the third quarter.

The Raiders would lead 40-38 over the Hurricanes at the end of the third.

Gainesville started the fourth quarter off with a bang, drilling a three to get things moving for their offense. Both offenses elevated their play in this quarter. Going back and forth down the court, responding to every big shot the opposition hit. The effort on the court was at an all-time high. Every possession felt like it was going to decide the game.

Despite both teams having a chance to win this game late into the fourth, neither could hit the game-winning shot. Regulation would end 54-54 sending us to overtime.

Everyone in the stands knew that this game would come down to the final possession. Timely shots matched with good defense from both teams in overtime pushed this game to its final seconds. Hurricane’s Junior Guard Seth Childers came up big when they needed him most. With less than 15 seconds left and Gainesville down 1, they inbounded the ball to him having to go full court. Here is what happened next:

My service in the building limited me just text tweets, no vids or photos but here’s the game ending play. Junior Seth Childers really came up clutch. pic.twitter.com/Up88DcvYS1

Childers finished the night with 10 points, 5 assists, and 3 steals.

After the game, he talked about his determination to finish off this game.

In addition, he also spoke about being a leader for this Hurricanes team.