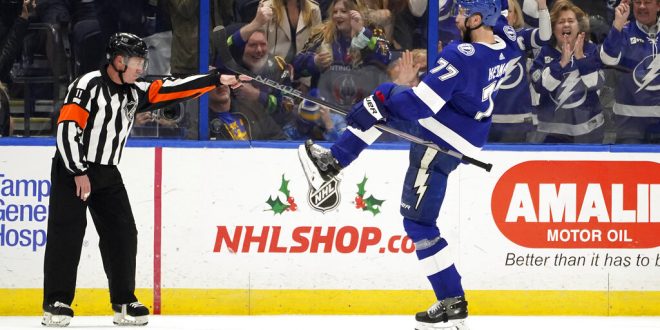 After falling to St. Louis on Tuesday, the Lightning bounced back and picked up a 4-2 win at home against the Blues. This marks win number 13 on the season, giving the Lightning 30 points in 22 games played.

Heading into last night, the Lighting had lost two games in a row: first to the Wild and then to the Blues. On the flip side, the Lightning had also won three straight games at home including back-to-back shutouts of the Flyers and Kraken.

For last night’s game the Blues were without starting goalie Jordan Binnington and Justin Faulk due to COVID-19 protocols. Winger David Perron was also out for the Blues, as he is dealing with an upper body issue and did not travel with the team on their road trip.

The Lightning put eight shots towards goal before Ondrej Palat scored on quick possession. Steven Stamkos won the puck of a break, who passed to Ross Colton. Colton returned the pass Stamkos and teed up Palat to open the scoring six and a half minutes into the period.

Despite 13 shots in the first period by the Blues, none found the net as Lighting goalie Andrei Vasilevskiy made eight saves and the Lighting led 1-0 at the first intermission. The Lighting had the only power play of the period, resulting from a high stick by Niko Mikkola, but the Blues succeeded on the penalty kill.

The second period was not as clean for Tampa Bay. The Lighting had two penalties in the period. The first went to Alex Killorn for hooking. Despite four shots on the power play, the Blues could not score and Lighting earned the penalty kill.

Less than a minute later, another penalty went against the Lighting as Alex Barre-Boulet was called for tripping. The Lighting nearly killed this penalty too, but the Blues scored with just 25 seconds remaining on the power play. Brandon Saad scored with assists by Scott Perunovich and Robert Thomas.

Even with 18 shots in the period, the Lightning failed to answer to the Blues and the score was 1-1 with one period remaining. Both goalies combined for 26 saves in the period, with Vasilevskiy making 14 and Blues’ Ville Husso.

With the game tied and one period left, the Lighting rose to the occasion to deliver victory. Four and a half minutes into the period, the Lighting earned a power play took the lead five seconds later off a goal by Anthony Cirelli, his eighth goal of the season. This goal was answered three minutes later, as the Blues scored on the power play. With 13 minutes remaining in the game, Pavel Buchnevich scored his ninth goal of the season to tie the game at two goals a piece.

It took less then a minute for the Lightning to regain the lead. Defender Victor Hedman took a shot from distance that found the net to put Lightning back in front with a 3-2 lead. Just over two minutes later, Hedman scored again after receiving the puck wide open in front of the goal. In less than three minutes, Hedman changed the game from a 2-2 tie to a 4-2 lead for the Lightning with under 10 minutes to play.

Tampa Bay’s defense stood tall for the remainder of the game and held on to win 4-2.

The win gives the Lighting 30 points on the season. At 22 games played, they trail the Panthers and Maple Leafs at 35 points each, yet the Panthers and Leafs have also played 23 and 24 games respectively.

The Lighting start a five-game road trip tomorrow where they go against the Boston Bruins, followed by Philadelphia, Toronto, Montreal and Ottawa.

Jack Shivertaker is a senior at the University of Florida pursuing a degree in Journalism with a focus on sports media.
@JackShivertaker
Previous Pittsburgh and Wake Forest Set For ACC Championship Game
Next Saint Francis Catholic loses 3-0 in a rematch against Williston