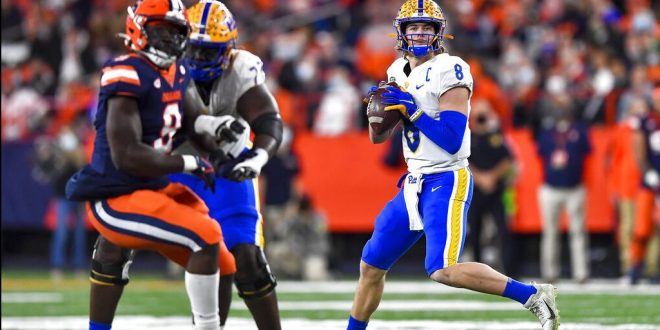 In a high-powered ACC championship game, the No. 15 Pittsburgh Panthers and the No. 16 Wake Forest Demon Deacons are facing off this weekend.

Both teams are heading into the match with 10-2 records with only one conference loss for each of them. Both teams boast strong offenses, making for what should be a very interesting game.

If this matchup looks strange, it’s likely because Clemson isn’t playing. The Tigers have played in, and won, every ACC championship game since 2015.

This season, however, the team hasn’t been as dominant as usual. Their 9-3 record this year opened the door for other teams to get their chance to shine.

The two teams that took advantage of the opportunity ended up being Pitt and Wake Forest and will now face off in this year’s ACC title game.

The story of the year for the Panthers has been their best offensive season ever.  And this is mostly due to Kenny Pickett’s historical season.

Pickett made a name for himself this season as he climbed into the first round of NFL mock drafts and reached the top of some quarterback rankings as well. He even found himself officially on the Heisman ballot as a strong candidate to win the award.

He became the only ACC quarterback to ever have 4,000+ passing yards and 40+ touchdowns in the first 12 games of the season. Pickett goes into Saturday with 4,066 passing yards and 40 touchdowns to only seven interceptions. In addition, Pickett broke NFL legend Dan Marino’s single-season school touchdown record that Marino has held since 1981.

Along with every star quarterback comes his favorite target and go-to man. For Pickett, that man was Jordan Addison.

The star receiver has 85 catches for 1,353 and 17 touchdowns. This puts him second in the ACC in catches, and first in yards and touchdowns. His standout season was good enough to get him nominated for the Biletnikoff award for the best receiver in college football.

While the Demon Deacons don’t have a Heisman candidate, their passing attack was arguably just as explosive. Quarterback Sam Hartman has had the best season of his career.

He’s currently third in the ACC in passing yards and passing touchdown, posting a stat line of 3,711 yards, 34 touchdowns and 10 picks. His strong play has been good enough to put him on the All-ACC Second Team.

Unlike Pickett who had a clear favorite, Hartman had one of the most productive wide receiver duos in the nation. A.T. Perry and Jaquarii Roberson each got their time to shine throughout the season and any given week could have been the one to carry the load for the Demon Deacons.

Perry hauled in 56 catches for 1,112 yards and 13 touchdowns, earning him All-ACC First Team honors. Roberson pulled in 62 receptions for 1,024 yards and eight touchdowns, putting him on the All-ACC Second Team.

For Saturday’s matchup, it’s safe to say both teams are going to play their hearts out. Pittsburgh hasn’t had a chance at the title since 2018 and has never won the ACC Championship. Wake Forest’s last appearance was in 2006 when they won by a score of 9-6.

They will both bring their all which could result in a very high scoring game. Both teams electric offenses will need their stars to show up if they want to bring home the title.

The field will be full of talent with All-ACC members on both sides of the football. While these accolades are impressive and show how successful of a season each team had, neither team is thinking about this. They’re thinking of how they can beat the team across from them.

Saturday’s game is set to start at 8 p.m.