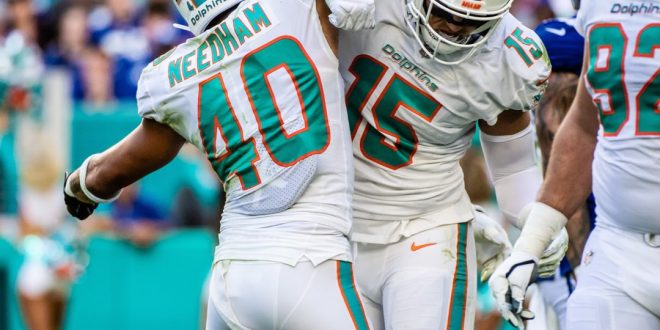 The surging Miami Dolphins rolled the New York Giants on the way to their fifth straight win. After starting the season with a 1-7 record the Dolphins have made their way into the wild card race.

The Dolphins defense set the tone early, beginning with a first quarter interception by Xavien Howard. They held the Giants to three first-half points. Then, in the closing seconds of the first half, Dolphins quarterback Tua Tagovailoa hit wide out Mack Hollins on a five-yard pass.

After taking a 10-3 lead going into the half, the Dolphins continued to stump the Giants offense. Rookie defensive end Jaelan Phillips recorded back-to-back sacks and broke the Dolphins rookie record for sacks in a season.

In the third quarter, Giants rookie Azeez Ojulari set the Giants rookie sack record. He sacked Tagovailoa to give him 6.5 sacks on the year.

New York and Miami traded a pair of field goals, and Miami won their fifth straight game 20-9. Meanwhile, the Giants dropped to 4-8 on the season. ESPN NFL Football Power Index 2021 gives the Giants a 2.8% chance of making the playoffs.

Quarterback Tua Tagovailoa, thinks his team can be better, and even though they played well enough to beat the Giants by 11, he thinks they left some plays out there.

Tua Tagovailoa doesn’t seem too please about the team’s win. Felt like they left some plays out there. pic.twitter.com/NjugbhiTsi

The Dolphins will enter their week 13 bye with a 5.7% chance of making the playoffs but still have the chance to make a wild card spot before it’s all said and done. The Giants will travel to Los Angeles to face the Chargers next week.