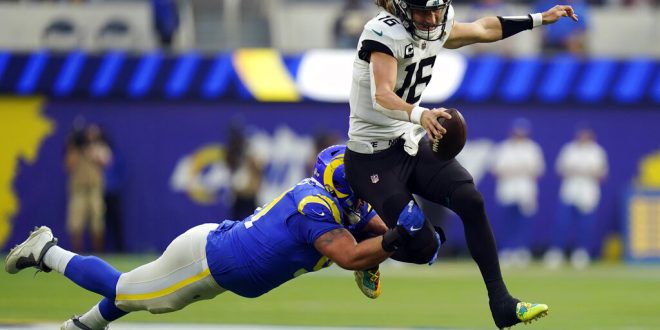 Coming into Week 13 of the NFL season the Los Angeles Rams were coming off of a three-game losing skid after starting the season 7-1. The Jacksonville Jaguars on the other hand came into this game with a record of 2-9. This game played out to be the rout many saw coming.

The Rams completely dominated both sides of the ball. But, the Rams obliterated the Jaguars especially on offense. Rams quarterback Matthew Stafford threw for 295 yards and three touchdowns while completing 26 of his 38 pass attempts. Trevor Lawrence on the other hand had a quiet game throwing for 145 yards with no scores or turnovers while completing 57 percent of his passes.

And on the ground, the Rams out totaled the Jaguars rushing attack 128 yards to 61 yards, despite Rams lead running back Darrell Henderson Jr. being sidelined for the game. While the Rams ran rampant on the Jaguars, the brightest day of the Jags’ game was their one score, a one-yard rushing touchdown from Carlos Hyde. This would be the only scoring play for Jacksonville all day.

With the rest of this overall dominating performance from the Rams, the same can be said about their defensive performance. The Rams allowed the only Jaguars score in the game in the second quarter. Other than that, the Rams also added two sacks and forced three fumbles, recovering two of them. The Jaguars only tallied one sack and one fumble recovery but added 73 tackles.

Coming up next for the Jaguars will be another road matchup. This time, against their AFC South rival and AFC South division leaders–the Tennessee Titans. And for the Rams, they travel to Arizona next week for a NFC West battle on Monday Night Football to take on the high-powered Cardinals.