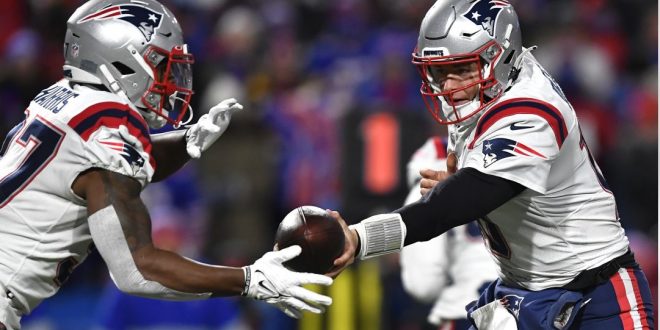 Mac Jones hands the ball off to Damien Harris in the first half. AP Photo by Adrian Kraus

The New England Patriots (9-4) beat the Buffalo Bills (7-5) 14-10 Monday night amid blustery conditions. The Patriots improved to 6-0 on the road this season and currently sit atop the AFC East.

The Patriots attempted just one pass in the first half. By the end of the game, quarterback Mac Jones completed two of three pass attempts for a total of 19 yards. Due to the windy conditions, New England went with the ground-and-pound offense, in which they out-gained Buffalo 222 to 99 in rushing yards. Jones gave much deserved credit to his offensive line, saying he’d never been a part of a game like that.

Jones handed the ball off 46 times, highlighted by a 64-yard touchdown run by Damien Harris. On third-and five, Harris found a gap up the middle and ran to the endzone untouched. The running back recorded a season-best 111 rushing yards and 10 carries, but left the game in the second quarter with an apparent hamstring injury. Bill Belichick opted to go for the two-point conversion, and succeeded, to give New England an 8-0 lead.

The only other points for New England came from field goals, with Nick Folk making two at 34 and 41 yards.

The hope of repeating as division champions is fading away in Buffalo. The race for the AFC Wild Card is heating up, however, the Bills dropped to just 5-5 against AFC opponents.

Buffalo’s difficulty running the ball continued into Monday night. The Bills running backs combined for just 60 yards on 19 carries. Buffalo had the potential for a comeback on their final three possessions. They reached the red zone three times with a four-point deficit. However, it resulted in only one made field goal, a missed field goal and a turnover on downs.

The Bills relied more on their passing game, as Josh Allen threw 30 times with 19 completions for 145 yards and a touchdown. Buffalo went just one-for-four in the red zone, and Allen said he takes the loss very personally.

Playing in the Elements

With a wind chill that dropped the temperature to the mid-20s and produced 40 mph gusts, elements were far from ideal.

Snow covered Highmark Stadium prior to the game. The snow lifted but 25 mph winds remained during the game. The opening kickoff went into the stands and New England punter Jake Bailey’s first punt attempt went 15 yards and into the Patriots bench.

The Patriots and Bills will face off once more in Foxborough, Massachusetts, on Dec. 26.