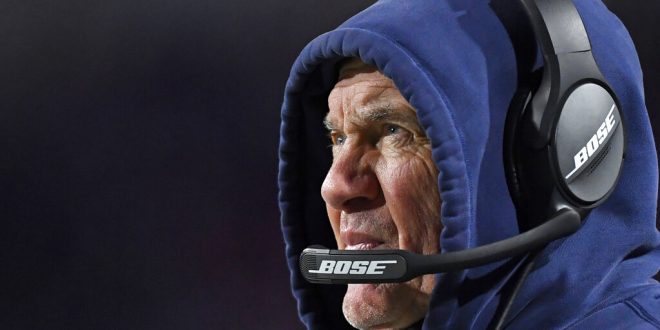 New England Patriots head coach Bill Belichick stands on the sideline during the first half of an NFL football game against the Buffalo Bills in Orchard Park, N.Y., Monday, Dec. 6, 2021. (AP Photo/Adrian Kraus)

Oh man, not again. The Patriots sit atop the AFC.

Such collective groans were let out nation wide Monday as the Patriots are now winners of seven straight. After defeating Buffalo 14-10 Monday, Bill Belichick’s team sits at 9-4, which puts them at the No. 1 seed in the AFC playoff picture. Certainly, this is a position New England faithful are all too familiar with, as the franchise has six Super Bowl victories since 2000.

So, the question begs: is New England really the best team in the AFC? Sitting firmly in the driver seat of the AFC East, many are beginning to speculate of championship aspirations in Foxboro. With that, rookie quarterback Mac Jones knows the team has to keep doing its job.

An old adage in the NFL is “Defense Wins Championships.” If such adages hold true, then the Patriots will be licking its chops.

In 2021, New England possesses one of the most stout defensive units in the NFL. Significantly, it sits at No. 3 overall in the NFL, holding opponents to 310.0 yards per game. Even further, the unit is allowing a mere 15.4 points per game, the lowest in the NFL.

Such play has to be rewarding for Belichick, who is seeing a return on a major investment. In unrestricted free agency, New England spent $163 million in guaranteed money on acquisitions. Notably, edge rusher Matthew Judon was given a four year, $56 million contract to wreak havoc on opposing quarterbacks.

Surely, the team is reaping the benefits of acquisitions such as Judon. In 2021, the former Raven has 12.5 sacks, which is a career high. Also, he has 13 tackles for loss and 25 QB hits, with both statistics on pace to shatter career highs. Furthermore, the defensive lineman has established himself as a prime candidate for AP Defensive Player of the Year. Deservingly so, as he anchors the defense for the No. 1 team in the AFC.

There were four quarterbacks taken ahead of Alabama’s Jones in the 2021 NFL Draft. Yet, none are making a greater impact than the No. 15 overall pick.

One year following then six-time Super Bowl champion Tom Brady’s departure, Belichick tabbed his replacement in Jones. Evidently, the rookie is already thriving in Foxboro, as he is one of the early favorites for AP Offensive Rookie of the Year.

In 2021, the signal caller has 2,869 yards in the air with 16 touchdowns and eight interceptions. Markedly, he leads all rookies in passing yards, touchdowns, yards per game and completion percentage. While the 2020 Heisman Trophy finalist continues to succeed, he remains humble, citing his offensive line for success.

Spoken like a true Patriots quarterback, Jones has his team firmly in contention for its seventh Super Bowl victory.

Time will tell whether New England is truly the best team in the AFC. However, as of now, the team will remain as the No. 1 seed in the AFC playoff picture, which features a pool of competition considered weaker than usual.

The Patriots will serve a bye week this week. But, the team will return Dec. 18 against the Colts in a pivotal AFC matchup.

Sam Petosa is a Journalism major pursuing a Specialization in Sports and Media at UF. The South Florida native produces daily shows for WRUF, including "Sport Scene with Steve Russell, and "The Tailgate." In addition, Sam provides weekly sports updates for WUFT News and radio Sportscenter's for WRUF radio. Sam has been a writer at ESPN Gainesville since January 2020.
@sampetosa5
Previous Patriots Out-Run Bills 14-10 in Windy Buffalo
Next Tom Brady: The 44 Year-Old MVP Candidate