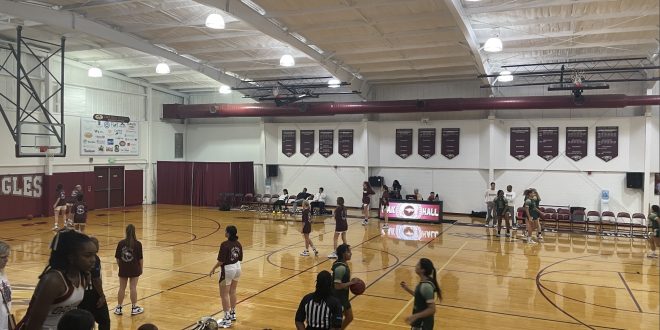 The Trinity Catholic High School Celtics (7-2) traveled to Gainesville to take on the Oak Hall Eagles (2-2) in a girl’s varsity basketball matchup. The Celtics defeated the Eagles 51-37 in a hard-fought victory.

Trinity Catholic came into the game on a three-game win streak, while Oak Hall had won two straight games of their own.

The Eagles came out with a strong zone defense that got them some early steals and blocks. Offensively, the Eagles also found success scoring on fast breaks. For Trinity Catholic, Sophomore Kieley Bateman scored some impressive early points for the Celtics to keep them tied with the Eagles at 10 apiece. The Celtics were able to outlast the Eagles leading 14-12 at the end of the quarter.

Trinity Catholic’s offense seemed to be clicking this quarter, as they were swinging the ball well and getting some great looks at the basket to extend their lead. The Celtics went up 24-16 and forced Oak Hall to call a much-needed timeout. Trinity Catholic’s success on offense translated to defense as they allowed only four points from the Eagles this quarter. The Celtics lead 26-18 heading into halftime.

Right out of halftime, Trinity Catholic’s offense seemed to be even more fluid than it was in the first half. They went on an early 7-0 run that extended their lead 33-18. Oak Hall was forced to call a timeout. The Celtics offense continued to dominate, scoring a few shots behind the arc and grabbing some crucial offensive rebounds. The Eagles, on the other hand, couldn’t figure their offense out and missed a lot of open shots. The Celtics extended their lead 46-21 at the end of the third quarter.

To begin the final quarter of the game, the Eagles started to show some life by scoring 10 straight and bringing great energy on the court. Oak Hall’s Tyla Young hit some big three-pointers and fired her team up down the stretch. It was too little too late though, as the Celtics responded with baskets of their own. The Celtics would go on to win the game 51-37.

Up Next For The Lady Eagles

Oak Hall’s Lady Eagles have a quick turnaround as they play tomorrow night at 6 PM and look to bounce back from a tough loss. They will be visiting Eastside High School to play the 2-3 Rams.