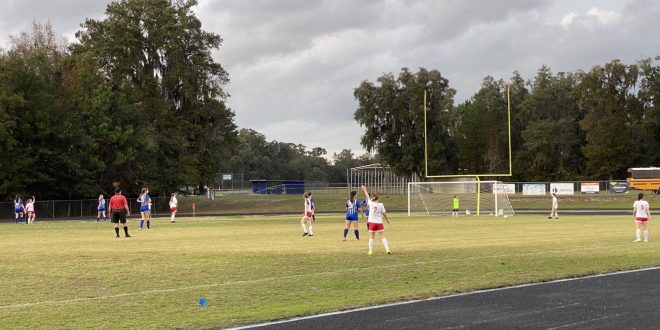 It was a bittersweet night for the Saint Francis Wolves on Tuesday evening as they celebrated senior night and played in their last home game of the season. Due to the construction of a new rubber track, the Wolves needed to move the rest of their games away for the remainder of the season.

Throughout the game, every player on Saint Francis’ team gave their all for them to add another win to their record. Amelia Adin, Emilie Rosado, Isabelle Rosado and Dalelia Jourdain did; however, stand out from the rest. Adin was the key playmaker for the Wolves. At any point of the game, Adin either had the ball or worked to try and steal it back. She was very skilled with the ball and made opponents think she was going one way but went the other. Adin set up teammates I. Rosado and E. Rosado to give them the chance to score multiple times throughout the game. Adin scored in the first 45 seconds of the game.

E. Rosado and I. Rosado are a sibling duo and they tore up the field last night. E. Rosado was quick on her feet ready for a pass and then to make a fast break towards the goal. She got plenty of opportunities to shoot and scored the second goal for the Wolves. Her sister I. Rosado played smart and always hung around the last line of defense so that when Adin booted the ball ahead of her she could out beat the Bears to the ball and try for a goal. I. Rosado scored the third goal for the Wolves but played 1 v 1 against the Bears’ goalie multiple times throughout the night.

1 v 1, I. Rosado makes a fast break towards the goal, takes a shot, but is stopped by the goalie. @ESPNGainesville @GNVpreps @ThePrepZone pic.twitter.com/jKPKBzEMFb

Jourdain played goalie for the Wolves last night and she saved them plenty of times from getting scored on.  Mary Whittington of Dixie County made Jourdain stay on her toes the whole game. Whittington took many shots that should have gone into the net, but Jourdain threw herself to deny the goal.

The Wolves Dominated the First Half

The first half started out quick for the Wolves as Adin made a beeline to the goal and scored within the first 45 seconds. The parents were going nuts with their noises makers as the team retreated back to their side of the field after celebrating the goal. It had been a bit of back and forth with the ball between the teams, but E. Rosado broke through and scored the Wolves’ second goal.

Both teams started to play a bit more aggressively, which resulted in Adin fouling the Bears. The Bears took the free-kick and it went soaring to the goal, Jourdain blocked it and it resulted in a corner kick. The ball got sent again and Jourdain catches it and punts the ball out.

Just before water break is called, Adin sprinted with the ball down the field, crossed it to I. Rosado. She then booked it towards and the goal scored the Wolves’ third goal of the night.

After the water break, the Bears came out hot and ready. They took shots at Jourdain left and right. At one point a shot was taken, the ball rebounds off of Jourdain and rolls behind her close to the net. Both teams scrambled for the ball, but Lauren Spiegler cleared the ball out before the Bears got possession and shot again. At the end of the half, the Wolves were winning 3-0 and started the senior night celebrations. They even honored the seniors on Dixie County’s team.

Bears Started to Give The Wolves a Run For Their Money

Coming out of the half, each team started to put their foot on the gas. Saint Francis did not allow the Bears to get any sort of possession of the ball for much of the beginning of the half. The Wolves tried to keep the ball on the Bears’ side of the field and took shots at any opportunity they got. This power trip the Wolves were on did not last as long as they hoped for because the Bears finally gained possession of the ball and scored just before water break. The Bears took another shot that bounced of Jourdain, got the rebound and took another shot that Jourdain saved.

Once the time on the scoreboard ran out, the Wolves and their parents cheered. Saint Francis beat Dixie County 3-1 at their last home game of the season. They will be traveling to Dixie County for a rematch later in the season on Jan. 1o.