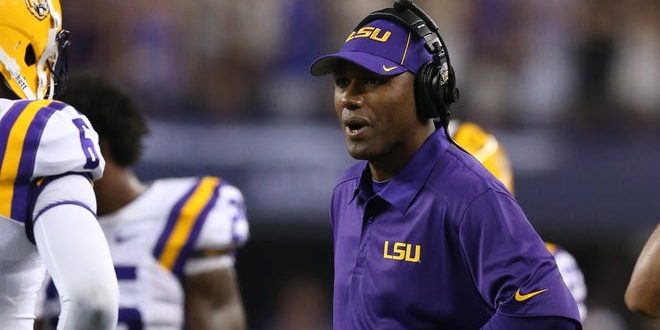 The Florida Gators have officially hired Corey Raymond as the cornerbacks coach and assistant head coach on the defense.

To say the least, this is a huge get for the Gators. Let’s breakdown why.

Who is Corey Raymond?

Raymond is a six-year NFL veteran who spent the last 10 seasons with the LSU Tigers. He coached the defensive backs between 2012 and 2017 and cornerbacks from 2018 through 2021. In addition, Raymond served as the recruiting coordinator for LSU the last two seasons while fulfilling his duties as cornerbacks coach. On top of this, he played his college days as a defensive back with the Tigers.

Not only did he produce good college players, Raymond saw several of his players get drafted. Under his tutelage, Raymond had 14 players drafted including the likes of those mentioned above in addition to Tryann Mathieu, Jalen Collins, Donte Jackson and more.

What this means for Florida

It’s been a rough week for Gator football fans who saw three of their top commitments from the 2022 class decommit from the University of Florida. Furthermore, the hiring of Raymond is a big one for new Head Coach Billy Napier and should be a sign to the Gator faithful that he does have a plan. In fact, some recruits have already began to take notice.

A pair of highly-regarded 2023 DBs react to the #Gators' reported hiring of Corey Raymond.

"I'd say it gives Florida more of a boost (in my recruitment)."

"Man, that got me fired up about Florida, man. New HC and now a great DB coach? Love it."

In his introductory press conference, Napier stressed patience and building a foundation. Getting the program to where many expect it to be will not be something that is done overnight but this is certainly a start in the right direction. Others around the country took notice to the hire.

Corey Raymond to Florida is massive.

I will miss Corey Raymond more than anyone. A great man, coach, and friend.. I wish you all the best @LSUCoachRaymond. I pray Florida treats you like the star you are. Hate that you had to leave us to get that. https://t.co/XU7NgL48iE

Currently, the Gators sit at No. 77 in 24/7 Sports recruiting rankings for the 2022 class behind the likes Toledo, Tulane, Miami, UCF, Northwestern, Vanderbilt and more. Like the old adage goes, patience is the key to virtue. But with the early signing period starting Dec. 15, Napier and his staff have a chance to improve their ranking.

In addition, the Gators will look to make an impact in the transfer portal. Napier will use Raymond and his ties which may include the likes of getting Eli Ricks, a former five-star recruit and considered to be the nation’s top-ranked transfer.

As the program continues to make adjustments and changes, the current roster is preparing for its bowl game. The Gators will take on UCF in the Gasparilla Bowl on Dec. 23.