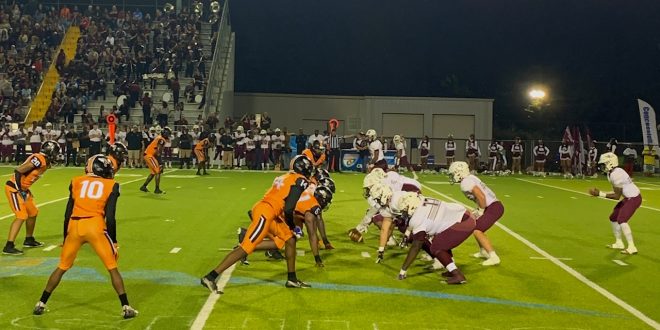 The general stakes of a game like this go without saying. It’s the state championship. Each program involved in this game had earned their place. Each group had worked tirelessly for months to get here. They had grinded out tough wins against good teams to earn their place in the postseason, and did the same thing over again, against the best of the best, in the toughest environments, to secure their spot here. This game is a matchup of two class powerhouses, both of which have more than earned that denomination.

For these two teams specifically, the stakes went a bit deeper than just that.

The Hawthorne Hornets have never won a state championship in the history of their program. Last year, with former gator and NFL tight end Cornelius Ingram in the head coach position, they reached their first state championship game – and, ironically enough, they had beaten Madison County in the state semifinals to get there. They came up just short in the title game, falling to Baker 27-14.

It’s safe to say that last year’s season, while the best in school history, left a bitter taste in the Hornets’ mouth with the way it ended.

This year, they came out smelling blood. They entered this state title game undefeated, with a 10-0 record including both the regular season and playoffs.

While quarter-back Tyler Jefferson and running-back Brian James made headlines offensively all season long, it’s the team’s impeccable defense that would end up being their defining characteristic.

Hawthorne’s defensive coordinator, Dustin Adkins, spoke pre-game on what getting back to the state championship means to him, last year’s loss, the pressure of getting back to this game, and defending Madison County:

The Cowboys have been a class 1A powerhouse for a while now. They had earned the title of state champions three masterful years in a row, from 2017-2019. However, last year they had fallen short of even reaching the game itself; Hawthorne took them out in the state semifinals, 18-14.

So, it’s safe to say that Hawthorne wasn’t the only team in this game coming in hungry and with a bitter taste in their mouth from the way last season ended.

One team was coming off a state championship loss. The other was coming off of losing in the state semifinals after winning the championship in three straight seasons – as the cherry on top, they had lost to the same exact team their playing in this years championship. So, yeah, the stakes were especially high for these two specific teams in this specific matchup.

Everything was on the line.

The start to this game was a story of long drives resulting in zeros on the scoreboard. A Cowboys interception off of what was a really well-placed ball from Tyler Jefferson slipping through the hands of Camren Cohens notwithstanding, the first quarter story lacked noteworthy moments. Both defenses showed up. Neither offense made anything happen. The score was 0-0 after 1.

Anthony Morgan, who has been so great for this Hornets team lately, just let a perfectly thrown ball from Jefferson slip through his hands — leading to a Cowboys INTERCEPTION.@ESPNGainesville @FHSAA @FlaHSFootball @ThePrepZone @GNVpreps @HMHSHornets @HHS_Football352 @MadCoFball

This trend did not last for long, though. Things heated up rather quickly in the second when, well, Tyler Jefferson did what he does.

Heating Up in the 2nd

The first points of the game came in the second quarter, when Hawthorne’s Tyler Jefferson broke through the middle of the defensive line on a QB sneak for a 25-yard rushing touchdown.

Madison County then did their job, responding in a big-time way.

QB Jamie Hampton connected with WR Delvin Boatman in the first real down-field shot by either team. This put the Cowboys at Hawthorne’s 26-yard line. Now, the Hornets defense did stand strong here for a moment. They got Madison County in a 3rd and 5 situation, likely forcing a field goal if failed. However, what looking back on it now ended up being one of the game’s most crucial moments, the Hawthorne front-line went offsides—this gave the Cowboys a first down, off of which they’d go on to score. The Hampton-Boatman connection would come through for their team once again. A textbook out-route by Boatman and money-ball from Hampton would create a 7-6 lead for Madison County.

The ensuing Hawthorne possession, Jefferson hit Cohens with an absolute dart to put the Hornets in a first-and-goal situation. This would lead to both Hawthorne’s and Jefferson’s second score of the evening.

Tyler Jefferson keeps the option and takes it himself 10 yards to the hole for his 2nd rushing TD on the night.

Looking back on it now, the opening of the second half was eerily similar to that of the first. Another scoreless quarter was outlined by long drives, stout defenses and a lack of “big-play” moments. That is, to further this point of parallelism, outside of a Madison County interception off of a Tyler Jefferson throw (both interceptions made by Madison County’s Jonathan Akins). This time, the difference was that Jefferson is to blame for the interception. The last was a ball that should be caught ten out of ten times. This, though, was vastly underthrown. Cohens, who had been route-running beautifully and his top target all night, beat the secondary and was open deep downfield. Jefferson just couldn’t quite get it to him.

For a quarterback as physically gifted in the run game as he is and with as accurate of an arm as he has in the short game, Jefferson has got to get that deep ball going. With that added to his arsenal, colleges will have trouble looking away. I’m sure that will be a focus in the offseason for the rising senior, who is already getting major college interest it should be noted.

1 quarter, 12 minutes, that’s all that stands between one of these programs and a state title.

With just under eight minutes of play remaining, Hawthorne still held the lead. It was 12-7 and the Hornets had a clear-as-day view of the light at the end of the tunnel. They could feel the smooth, shiny exterior of the trophy in the palm of their hands. The Hawthorne loyal who had traveled over two hours to Tallahassee for this game felt elation beginning to course through their veins, just minutes away from what everyone involved in that program has coveted so much for so, so long.

As it would end up, though, with just under eight minutes to go is where it all took a turn for the worst for those Hornets.

A high snap led to a blocked punt on fourth down for Hawthorne. Madison County took advantage of this critical mistake and ran it all the way to the goal-line. They’d go on to score the next play on a rush from Hampton.

This mistake, which led to the game-winning touchdown, has changed the history of both Madison County’s and Hawthorne’s school histories, respectively – one for the better, the other for the worse.

Congratulations to Coach Mike Coe, along with the rest of the coaching staff, and the Madison County Cowboys, the Florida Class 1A State Champions. They’ve put together an incredible season and deserve the honor they’ve now held 4 of the last 5 years.

The Hawthorne ambience post-game, as anyone who has ever played a competitive sport before would both expect and understand, was very emotional. After all, it’s been quite the journey. Coach Ingram and his Hornets have persevered through some injuries and multiple covid-related game cancellations to earn the undefeated regular-season record.

As players and coaches were leaving the locker room, Coach Ingram, still somewhat caught up in the emotions of it all, spoke on his guys. He talked about his seniors and what they’ve met to the program, as well as juniors Tyler Jefferson and Brian James returning next season after phenomenal 2021 outings.

These two teams are not going anywhere any time soon.

You can rest assured Hawthorne will, once again, be back for blood; their program has only been on the uptick as of late, with the program’s best seasons being their most recent. Coach Ingram and DC Adkins have built a winning culture.

Madison County, in their own right, will continue to be a problem for their opposition as they’ve been known to be by all at this point. They won’t be looking to lose their mantle by any stretch of the imagination, after seeing it in Baker’s grasp last year.

Both programs are high class.

Both coaching staffs are top tier.

Both teams are immensely talented.

Both fan bases are ride-or-die till the end.

Both the state champion Cowboys and state runner-up Hornets are here to stay.

Zackary is a Journalism: Sports & Media major at the University of Florida. He has years of experience providing online content for various sports-news outlets in every form, as well as experience running multiple sports-related social media accounts with high followings. Zackary's planned graduation is May 2024. Please feel free to contact via email at zackweiss48@icloud.com. Links to Zackary's personal social media accounts are directly below.
@zackweissespng
Previous FEATURE: Ben Davis, The Junior Who Can Do it All
Next Gator Women’s Hoops Gets Bragging Rights After Defeating FSU