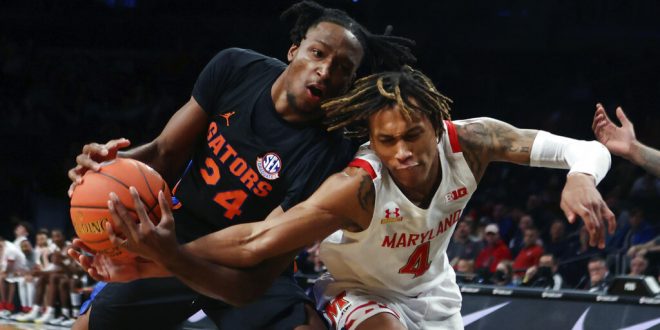 Maryland's Fatts Russell (4) knocks the ball away from Florida's Phlandrous Fleming, Jr. (24) during the second half of an NCAA college basketball game Sunday, Dec. 12, 2021, in New York. (AP Photo/Jason DeCrow)

The number 20 Florida Gator men’s basketball team (7-3) fall to the Maryland Terrapins (6-4) in nail-biting fashion 70-68 on Sunday night in the Basketball Hall of Fame Invitational at the Barclays Center.

Maryland’s Donta Scott hit a shot with 16.8 seconds left to give the Terrapins the bucket that would give them the win.

After Florida gets a basket, Donta Scott gets this off-balance shot to go to give the Terps a two-point lead with 13 seconds to go. pic.twitter.com/g5uZCn0wai

This was a back-and-forth affair all night long. There were 11 different lead changes with the largest lead by either team being seven; the Terps had a seven point lead with six and half minutes to go.

At this point, it would be Tyree Appleby that brought the Gators back into the game. He hit two three-pointers to pull Florida within one.

The last five minutes was basket-after-basket for each team as Maryland was led by Eric Ayala and Fatts Russell. The backcourt duo each had 19 points while playing 38 and 37 minutes respectively.

An important part of this game was Colin Castleton’s foul trouble. Florida’s leading scorer and rebounder was forced to miss the final 10 minutes of the first half due to foul trouble and fouled out of the game with 58 seconds left. Without the big man on the floor, Maryland’s Scott was able to sink the difficult shot over a smaller defender. Castleton finished with nine points and 10 rebounds in just 26 minutes.

With the game on the line, Appleby had the ball in his hands and got a good look at a step-back three that didn’t fall. Despite the miss, Appleby shot the ball well going 5 for 8 from deep and finished with 15 points. It was the rest of the team that struggled from the field.

As a team, the Gators continue to struggle finding consistency shooting the ball. Just one other Gator scored in double figures; Phlandrous Fleming Jr. had 15 points but did so on just 3 of 12 shooting while going 7 of 8 from the free throw line. He also hauled in 11 boards.

Florida shot 37.9% from the field and did something they haven’t done this year, they played poor perimeter defense. Maryland shot 8 of 13 from deep and 49% overall. Myreon Jones continues to struggle finding consistency as well going 1 for8 from the field while finishing with just three points.

It was a rough week for the Gators who started off with a home loss to a then winless Texas Southern team. Coach Mike White’s squad has lost three out of their last four games and will likely find themselves out of the Top 25 when the new rankings come out.

Despite the stretch, there are plenty of positives and learning moments Florida will take out of the last few games. They’ll have some time off before a matchup with USF. The Gators have two more games left before they open up SEC play.

For Maryland, this was the second game coached by interim head coach Danny Manning. The Terrapins will have a while off before taking on Loyola-Maryland on December 28.