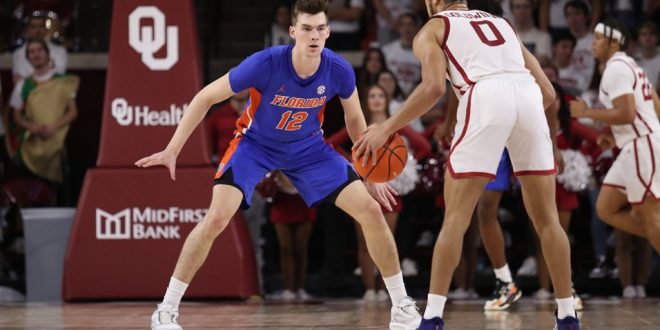 For Florida men’s basketball, the journey to SEC play has been delayed and riddled with illness. A team COVID-19 outbreak postponed the 9-3 Gator’s December 29 matchup with Ole Miss.

So, they waited and went through practices missing swaths of the roster.

But, here the Gators are now-kicking off conference play Wednesday night against no less than No. 15 Alabama (10-3).

While the  Florida staff writer Chris Harry wrote that without divulging confidential intel, the Gators were missing far more than four players.

After a health-and-safety protocols pause, the squad was able to get back to going up and down the court for the first time on Saturday. Though they were hopeful for a full squad the day before the game, those hopes didn’t come to fruition on Tuesday. Sure, missing time to learn the game is a struggle.

However, returning to practice after many days meant something familiar to gym-goers returning after a break: soreness. White said some players hadn’t even bent their knees for five to eight days.

The coaches are subbing a lot in practice, in addition to running some sprints, to evaluate where players are physically and mentally. In making decisions about health and soreness, White said he’s relying a lot on Dave Werner, the Assistant Athletic Director for Sports Health.

Power forward Colin Castleton knows fatigue will be a struggle for the Gators. Players will need to leave the game for a break more frequently, and the seven-man bench will contribute more.

Simultaneously, he knows Alabama does not care, and neither do his coaches.

Indeed, White says the coaching staff tells the team ahead of games: “No one’s feeling sorry for you.”

White said every team in the NCAA will have to deal with COVID-19 adversity. The Gators will be grateful when they can practice and do they best they can with whomever is available. Frankly, he said the Gators have faced adversity every year.

Gators Look Back at Nonconference Play, to Improvement

This season, they didn’t handle that adversity well the first time, White said. Case in point, they lost to Texas Southern after losing their first game of the season to Oklahoma.

As far as team cohesiveness, White thought the team came together as a group at the end of the fall semester. He acknowledged that the schedule was favorable to the Gators, with wins coming against South Florida and Stony Brook.

Looking back to non-conference play, Castleton said inconsistency was why the Gators lost games they should have won.

The center said he’s seen the bench play well. Personally, he will continue to do the things he does in the paint.

Florida can progress by grabbing more offensive rebounds, limiting turnovers and knocking down easy shots. These improvements will help the Gators to the build their confidence, and, Castleton said, will definitely happen.

Adding to the adversity, each year, White says the Gators face a seemingly tougher SEC schedule. The seventh-year UF coach says the league may be having its best performance in its history up to this point.

Half of the teams in the SEC are ranked in the top 25 of ESPN’s College Basketball Power Index. (While Florida dropped out of the AP rankings in early December, they dosit at No. 24 in the BPI.)

Adding to the ‘crazy,’ the Gators’ next three games come against AP top-25 ranked opponents.

Though they might be off to a late start to the SEC season, Alabama could make up for it with their bolting speed. The Tide’s strong three-point shooting and backcourt help produce a 73-69 win over No. 18 Tennessee on December 29.

So sure, things aren’t perfect. But the Gators are grateful to be on the Exactech Arena, confronting adversity.

The Gators’ SEC opener will air on ESPN2 at 7 p.m.

@julianna_reich
Previous What’s Next for Baker Mayfield and the Browns?
Next Kyrie Irving Set to Make Season Debut