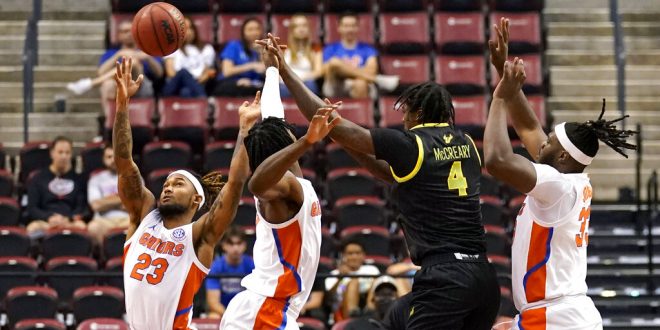 A career-high performance by senior guard Phlandrous Fleming Jr. catapults the Florida Gators men’s basketball team to a home victory to close out non-conference play. The Gators hosted the Stony Brook Seawolves in a 87-62 clinic in the O’Connell Center.

This comes after a 66-55 victory against the USF Bulls in the Orange Bowl Classic. A graduate transfer from Charleston Southern, Fleming scored a team-leading 20 points filling in for guard Myreon Jones, who was ruled out due to health and safety protocols. Fleming was 4 of 5 from beyond the arc, shooting 6 of 8 overall.

Head Coach Mike White speaks on the late addition of Fleming to the starting lineup.

For the game, the Gators had a total of four players score in double figures. Colin Castleton contributed an efficient 15 points and seven rebounds shooting 5-for-7 from the floor. From the bench, CJ Felder and Jason Jitoboh combined for 22 points and 12 rebounds.

The Seawolves were unable to generate any momentum offensively as Florida forced 17 turnovers.

Gators Get on a Hot Start

Florida led from wire-to-wire leading by as many as 31 points in the second half. Also, for the game, the Gators defensive intensity was too much for the Seawolves to handle. Florida out rebounded the opposition by 19 and added five blocks.

In the first half, the Orange and Blue rocketed to a quick 10-0 start. However, a Tykei Greene three-pointer stopped the bleeding for the Seawolves. Castleton made his presence known early scoring four points during that spurt.

Bench play for Florida was a huge factor in the first half as they continued to stretch their lead. An early sighting of freshman guard Kowacie Reeves, who drained a corner three with 15:21 left in the period to put the Gators up 13-5.

Also, Jitoboh’s relentless effort and a career high seven offensive rebounds was reward as well. With 6:09 left before the half, tremendous hustle by the 6-foot-11 inch junior for a loose ball was rewarded as Tyree Appleby found the big fella for the easy layup. The sequence gave Florida a 34-17 advantage.

At the break, Coach White and the Gators had a 48-27 advantage led by Fleming with 14 points and Castleton’s 11. Fleming talked about his first half performance.

With 7:35 left before the final buzzer senior forward Anthony Duruji added to an already impressive highlight reel. During a 13-4 run, Duruji scored on a breakaway 360-degree slam rocking the O’Connell Center putting Florida up 76-48

The Gators break for the holidays winning back-to-back games. Now, the Orange and Blue’s  momentum will put them in good spirits as they start SEC competition next week. Coach White will look to prepare as they kick off conferences play against Ole Miss (8-4) on the road.

Florida has lost their last two outings in Oxford as tip off is scheduled at 5 p.m. on Dec. 29.