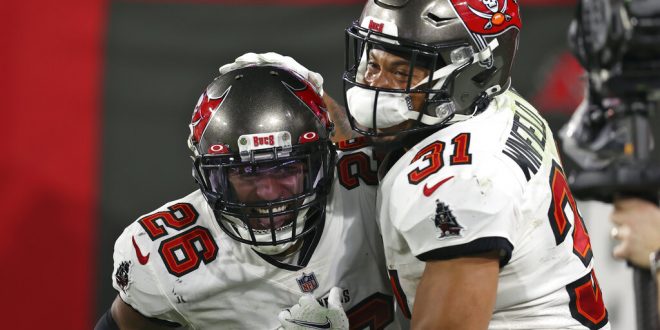 Despite the slow start, the Tampa Bay Buccaneers found their stride and beat the Carolina Panthers 41-17 in Tampa.

The Bucs couldn’t score in the first quarter , but their offense was clicking by the end of the game. They finished the game scoring 24 points in the fourth quarter.

Tampa struggled to put points on the board in the first half. They were unable to score in the first quarter and only had three points with two minutes left in the half.

With 1:48 left until halftime, the home team had the ball all the way back at the eight-yard line. Quarterback Tom Brady was on fire as he found three different receivers for big gains. He capped off the 92-yard drive with a pass to Le’Veon Bell for the touchdown and their first lead of the game.

After taking their first lead of the game, the Panthers were never able to regain control. The Bucs were only up by seven as the third quarter came to a close, but they finished off the away team with a 24-point effort in the final quarter.

The Buccaneer’s key players showed up big in the win over Carolina. With the running back position depleted due to multiple injuries, Tampa relied heavily on Brady and the passing attack.

While not many defensive players had big stat lines individually, the unit as a whole did a good job stopping the Panthers’ offense. They had six quarterback hits and six passes defended, making it hard for Sam Darnold to find his rhythm.

This game cemented a historic season for the Buccaneers and the team’s key players.

Gronkowski needed seven catches and 85 yards to earn a $500,000 bonus for each. His monster game helped him meet the incentive and close out the season with 55 catches for 802 yards. He even broke his tie with Tony Gonzalez for most 100-yard receiving games for a tight end, reaching 32 in the game against Carolina.

Evans was able to extend his record for most 1,000 yard seasons to start a career. He only needed 54 yards to hit the mark, and he easily met the goal, finishing the season with 1,035 yards to end the season. He also broke his own record for reception touchdowns in a season with 14 this year.

The Bucs had already clinched a playoff birth, so the win wasn’t necessary. However, their win and a loss for the Los Angeles Rams‘ would give the Bucs the No. 2 seed in the NFC.

Tampa Bay played their starters for the majority of the game and made sure to get the win. They did their part, so they just needed some help from the San Francisco 49ers, who played the Rams at the same time.

The 49ers took care of business in overtime against the Rams and gave the Bucs the No. 2 seed in the conference. This guarantees the Bucs home field advantage through at least the divisional round.

They will now prepare to play the No. 7 seed Philadelphia Eagles at 1 p.m. on Saturday at Raymond James Stadium. The last time these teams played, the Bucs narrowly won by a score of 28-22 in week six.