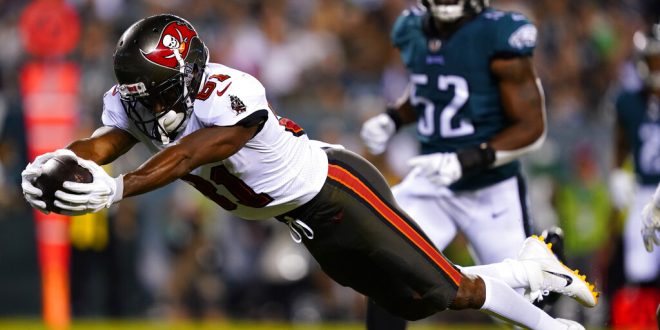 Tampa Bay Buccaneers wide receiver Antonio Brown (81) scores a touchdown during the first half of an NFL football game against the Philadelphia Eagles on Thursday, Oct. 14, 2021, in Philadelphia. (AP Photo/Matt Rourke)

After securing an emotional win against his former team in New England last week, business was back to normal for Tom Brady and his Tampa Bay Buccaneers. Sitting comfortably at 4-1 on the season, the matchup with the Philadelphia Eagles on Thursday night did not appear too formidable.

While Eagles quarterback Jalen Hurts was able to find the end zone with his legs, the lack of passing game and the Bucs’ offense were too much for the Eagles to handle. Tampa won in a game that was probably less close than the scoreboard indicated, 28-22.

Tampa received the ball to start the game, and made quick work of a Philadelphia defense that had allowed 101 points in the last three games before the matchup against Tampa. Brady found Alabama alum O.J. Howard in the end zone, and it was 7-0 Buccaneers early.

Hurts was able to keep up with Tampa, though, and drove his own team down the field to match. Also finding his tight end, Hurts lasered a pass to Zach Ertz to bring the game to a 7-7 tie. That was the end of Philadelphia’s success for a while, though, as the team would trail 21-7 entering halftime.

How did they get there? First, Antonio Brown found himself wide open in the red zone, and Brady made an easy toss to the former Steeler who then raced in for the score. Later on, another lengthy drive from Tampa Bay resulted in running back Leonard Fournette pounding the rock into the end zone with two minutes to go in the second quarter. The Eagles offense was unable to generate any big plays, and it showed on the scoreboard.

Needing a spark, Philadelphia received the ball after halftime; once again, they were unable to score any points to draw closer in the game. Tampa made them pay, as the first team to score in the second half was once again the Bucs. Fournette began to wear down the Eagles defense, and another easy run for the LSU grad gave the Buccaneers a 21-point lead in the third quarter. The Eagles were not quite done, though.

Hurts got his team back on the board late in the third quarter, running the ball in for a touchdown that brought the game back within two possessions. The next team to score was once again Philadelphia, driving down the field late in the fourth quarter. Hurts received the snap inside the 10 yard line, and dashed in for his second rushing touchdown of the day. A successful two point conversion attempt for Hurts gave his team a chance to win with another touchdown.

Still, it was too little too late for the Eagles. Brady iced the game once he got the ball back, and Hurts never got a chance to complete the comeback.

Brady and the Bucs’ now 5-1 on the year, have a lengthy rest before welcoming the Chicago Bears to Tampa Bay on October 24.

Carson Cashion is a second-year student at the University of Florida, and has a major in journalism with a specialization in sports and media. Originally from the Orlando area, Cashion has covered the UF Gymnastics team as well as Oak Hall athletics for ESPN Gainesville.
Previous South Carolina and Vanderbilt look to snap SEC losing streaks this weekend
Next Florida Gators Volleyball takes on Texas A&M