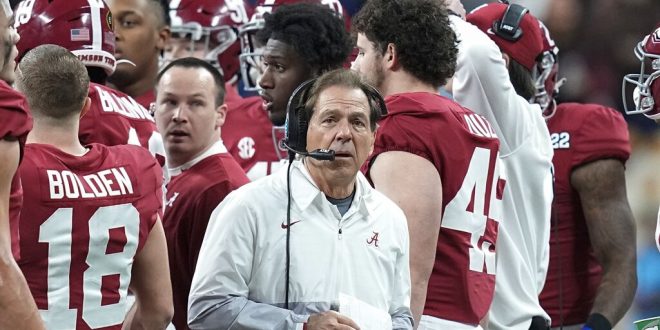 The Georgia Bulldogs defeated Alabama with a 33-18 victory over the Crimson Tide in the CFP National Championship Game. Alabama’s 15 point loss on Monday night was their second-worst performance under Nick Saban. The Crimson Tide held the lead heading into the second half. They “just didn’t finish,” according to Saban. The loss marks Saban’s third national championship failure out of nine appearances with Alabama.

A large factor that kept Alabama from securing a victory was the loss of two key players. Early in the second, wide receiver Jameson Williams caught a long pass to get Alabama’s offense moving. Then, Jameson’s leg got caught awkwardly in the turf, causing him to fall to the ground and grab his knee. He remained out for the rest of the game. Undoubtedly, this proved to slow the Crimson Tide’s offense down.

Jameson Williams was injured on this play: pic.twitter.com/gfNZ7OAMkH

Additionally, the Crimson Tide were already without wide receiver John Metchie III. He tore his ACL in the SEC championship. Without their top two receivers, Alabama struggled to take control of the game. Coach Saban addressed the impact of Metchie and Williams on their offense. He said Bryce Young is a strong quarterback, but he needed the players around him to play well too.

Alabama took a six-point lead with a touchdown early in the fourth quarter. However, they were unable to get through Georgia’s defense for the two-point conversion. The Bulldogs dominated the remainder of the game with three scores, including Kelee Ringo‘s game-securing interception returned for a touchdown. Coach Saban says his team “had an opportunity” to tie the game and overtime before the pick was thrown:

Additionally, Young was sacked four times including the final play of the game. But Saban’s squad made a lot of other mistakes in the fourth. Defensively, they were unable to keep Georgia from making big plays. Coach Saban said Georgia “ran the ball, and we didn’t stop them”. Georgia’s ability to run the ball was one of the big differences of the game. The Bulldogs outrushed Bama 140-30.

A Long Journey Ends for Alabama

Ultimately, the Crimson Tide fell to the strength of the Bulldogs. But that doesn’t mean they had a bad season. Coach Saban acknowledges all the successes his team accomplished this year, including their SEC championship title. He says they overcame many obstacles to get to this point and is proud of them. Furthermore, Saban says he would rather lose a championship game to Kirby Smart, his former assistant, more than any other coach. Smart worked under Saban in Tuscaloosa from 2007-2015.

When the clock struck triple zeros, Georgia was crowned champions of college football for the first time since 1980.