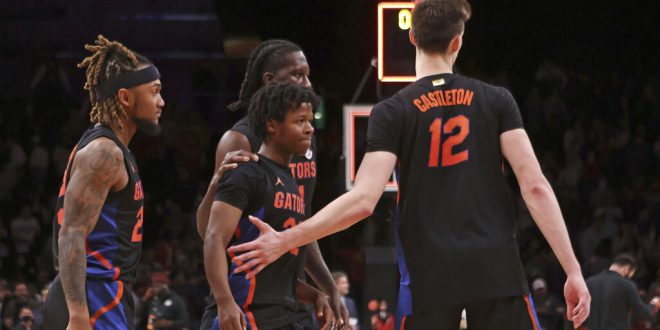 The 10-6 Florida men’s basketball team take on the 12-4 Mississippi State Bulldogs tonight at 6:30 in the O’Connell Center.  The game is a toss up, as the Gators reigned victorious with a 71-63 win against South Carolina Saturday, and the Bulldogs beat Alabama in a tight 78-76 the same night.

The Gators last played the Bulldogs Jan. 16, 2021 at Humphrey Coliseum, where Mississippi State outscored Florida 72-69. The Gators seek an SEC win after a three-game losing streak against Alabama, Auburn and LSU.

Gator guard Reeves is quickly making his mark on the court in his freshman year; the rookie has played 11 out of 16 games this season and led the team with 14 points against South Carolina Saturday — tied with guard Phlandrous Fleming Jr. He had his third start Saturday and played 23 minutes.

Forward Castleton strong performance against South Carolina. Including, the senior forward put up 10 points with 27 minutes on the court and grabbed seven rebounds. He had eight blocked shots — a season high.

Guard McKissic may be a force to be reckoned with tonight.  He did not contribute much to the offense with his two points, but he had six rebounds and four assists within his 23 minutes on court.

The Gators hold a 65-52 series win-advantage against Mississippi State.

Bulldogs On the Offense

White has multiple South Carolina players on his radar. Forward Javian Davis, forward D.J. Jeffries and guard Cameron Matthews all have Florida eyes on them as they proved their success in the 2021-2022 season.

The game will be on SEC Network.