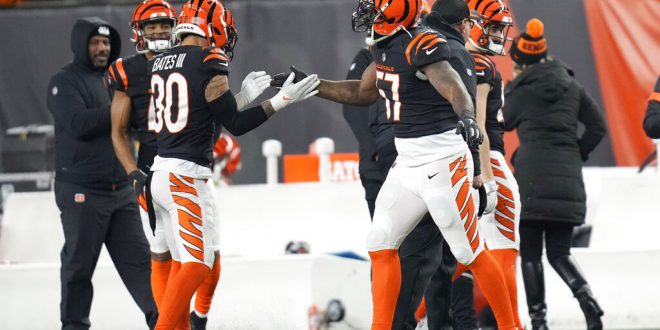 The Titans and Bengals go head to head for a shot at the AFC Championship. Only one can advance.

The Tennessee Titans have been nearly unstoppable this season, earning the No. 1 seed for the first time since 2008. Head coach Mike Vrabel has created a winning mentality in Tennessee, and

Henry was put on reserve during week eight after undergoing foot surgery. While he was active, Henry put up 937 rushing yards, 18 receptions, and 10 touchdowns. He was a key part of the Titans offense and his injury has created the need for a considerable playbook change. Not anymore. Henry is expected to start against the Bengals this weekend, and will be a game changer for the Tennessee offense. Henry is focused on running through the Bengals defense. It will be no easy feat however, and Henry is ready to put in the work for it.

Bengals fans have waited a very long time for a playoff win, 31 years to be exact. Last week, Cincinnati got their wish. Joe Burrow and the Bengals snuck their way past the Raiders in the Wild Card round. The next challenge awaits them on Saturday, and the game plan is simple: keep doing the same thing. The Bengals have a formula that works, and with the right vision, they can pull off the upset.

Cincinnati has focused heavily on the magic that Ed Orgeron built in 2020 at LSU. Joe Burrow and Ja’Marr Chase are as dynamic a duo as you can get, and they’ve shown it. The two have connected for 13 touchdowns in the regular season, and are extremely creative with play execution. These two will be the definitive playmakers against Tennessee, with some help from their defense, the Bengals might see themselves in their first AFC Championship since 1988.