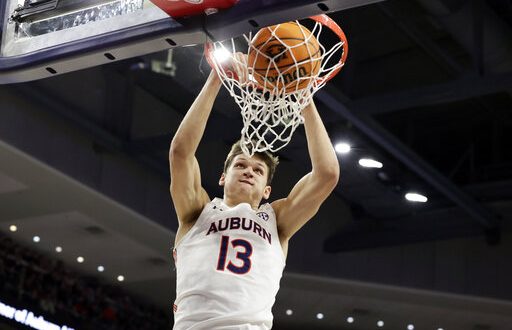 Auburn forward Walker Kessler (13) dunks against Georgia during the second half of an NCAA college basketball game Wednesday, Jan. 19, 2022, in Auburn, Ala. (AP Photo/Butch Dill)

A huge weekend in SEC basketball as two-teams ranked in the Top-15 face off in their only scheduled meeting of the year. Head coach Bruce Pearl and No. 2 Auburn Tigers will host No. 12 Kentucky Wildcats on Saturday.

Both teams enter the game ranking among the top two in the conference and are undefeated on their respected home floor. Also, a streak will end in this Saturday matchup.

For the Tigers, they look to defend home court looking to extend their impressive hot streak of 14 games. While the Wildcats hope to improve their four-game winning streak. Here is a quick preview of the matchup between these two stellar basketball programs.

Being ranked in the top two in the recent AP Poll, is the highest ranking for the Tigers since 2000. Also, Coach Pearl is looking for his 10th overall victory against the Wildcats. A win puts him in conversations among well respected college basketball coaches. Such as Bob Knight, Roy Williams, Dean Smith and more.

From a talent standpoint, Auburn has the possibility to have as many as four players drafted in the upcoming NBA Draft. Including 6-foot-10 forward Jabari Smith, who is projected to be a top-5 draft pick in recent mock drafts.

The freshman leads the Tigers in scoring with 15.8 points per game and averaging 6.3 rebounds.

Smith, is coming off 12-point performance in a 23-point win over Georgia Bulldogs on Wednesday, 83-60 .

Depth has been strong force the Tigers this season. Auburn had six players scoring in double-digits including sophomore forward Walker Kessler’s leading with 15 points.

For the year, he is averaging 80.2 points per game and allowing 65.6 points on the defensive end.

Got the job done.

We win, we dance. pic.twitter.com/x2YgFYg8fv

Smith isn’t the only highly sought after NBA prospect in this matchup. Freshman TyTy Washington Jr., according to Kyle Boone of CBS sports, ranks the guard as a top-ten prospect in the next draft.

Washington is averaging 14.2 points per game. In their last game against Texas A&M, Washington didn’t particularly shoot the ball well from the floor. He still added eight points shooting 3-for-10 from the floor in a 64-58 victory over the Aggies.

Also, Smith will be guarding Wildcats’ forward Oscar Tshiebwe. The junior averages a double-double on the year with 16.1 points and an impressive 14.8 rebounds per game. Tshiebwe had another 14 rebound game against the Aggies on Wednesday for head coach John Calipari.

On the year, the Wildcats score at a higher rate than the No.2 ranked team with 82.9 points per game. Additionally, on the defensive end they hold their opponents to 62.8 per game. Saturday’s matchup can go either way so a close game late is expected.

Now, Calipari and the Wildcats hope to knock off the red hot Tigers at home. The game is expected to tip off at 1 p.m. on Saturday, Jan. 22, at Auburn Arena.

Previous Florida Gators Women’s Basketball Prepares for No. 11 LSU
Next Clash of the Titans (and Bengals)