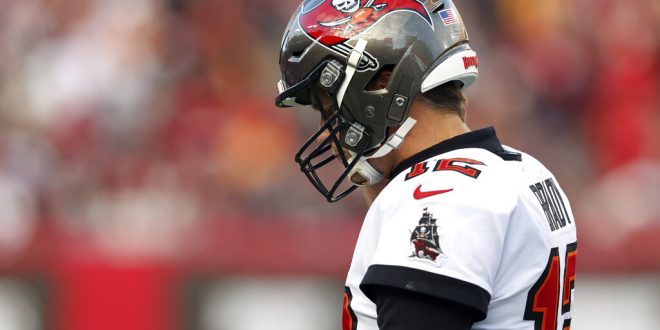 Tampa Bay Buccaneers quarterback Tom Brady (12) walks off the field after a drive stalled during the second half of an NFL divisional round playoff football game against the Los Angeles Rams Sunday, Jan. 23, 2022, in Tampa, Fla. (AP Photo/Mark LoMoglio)

The Tampa Bay Buccaneers promising season came to a disappointing end Sunday, as they lost to the Los Angeles Rams. The 30-27 loss ended up being one of the games of the year despite Tampa Bay being down by as much as 24 points.

How the Game Unfolded

The Rams almost always had control of the game. The away team started the game fast and almost blew the lead they worked so hard to earn. LA scored on their first three possessions, including a 70-yard touchdown to Cooper Kupp not even a minute into the second quarter. The Bucs first three drives, however, resulted in two punts and a field goal.

The Rams closed out the second quarter with another field goal and had the 20-3 lead going into halftime.

To start the second half, the Rams were still clicking, and the Bucs were trying to find their footing. LA scored another touchdown, extending the lead to 27-3. This started the Rams’ scoring drought, and the Bucs pushed to keep it close. All they needed to start the comeback was a field goal.

The Ryan Succop field goal made it a 21-point game with three minutes left in the third quarter, which Tom Brady is more than capable of completing. On the Rams first play of the next possession, Sean Murphy-Bunting forced Kupp to fumble, giving the Bucs the ball in LA territory.

Seven plays later, the Bucs scored a touchdown, and suddenly, the Rams only held a two possession lead.

Following a wild sequence, including a fumble by each team and two turnovers on downs by Tampa, the 14-point lead was looking insurmountable.  The home team regained possession of the football with less than four minutes left in the game.

Luckily for the Bucs, Mike Evans beat star cornerback Jalen Ramsey deep and hauled in a 55-yard touchdown. The lead was now down to seven points, and Tampa was rocking.

With no timeouts remaining, the defense needed to step up and make a play to get the ball back to the offense. Ndamukong Suh answered the call and forced Cam Akers to fumble the ball for the second time on the day.

All the Bucs needed were seven plays, scoring the game-tying touchdown on a run by Leonard Fournette. Now, they just needed to hold the Rams for 42 seconds to send the game to overtime.

Unfortunately for Tampa, Kupp had two big receptions giving Matt Gay a 30-yard field goal. Gay split the uprights, sending the Bucs packing and the Rams to the NFC Conference round.

What Went Wrong for the Buccaneers

Outside of Matthew Stafford, the Bucs looked overwhelmed by the Rams star players. Without tackle Tristan Wirfs, the Bucs couldn’t stop the Rams dynamic pass rush. Aaron Donald, Von Miller and Leonard Floyd all got involved and each had a sack.

The Rams offense couldn’t hit its stride until it was too late. Brady had a rough first half including an interception. On the day, Brady was sacked three times, hit six times and had six passes defended.

He credited the Rams defense for making it difficult to get much going on offense. Their efforts limited the rushing attack and forced them to be pass heavy to get back into it.

On defense, the Bucs did well against Akers and the rushing attack but struggled against the passing attack. Kupp was the standout for the Rams hauling in 9 catches for 183 yards and a touchdown.

What the Future Holds for Tampa Bay

Tampa Bay’s future is very uncertain going forward. Last offseason, they were able to retain all of their key players, but it might be more difficult to do so this season.

Chris Godwin is a free agent, and eventually he’s due for a massive contract, whether its with the Bucs or someone else. On top of that, he will be recovering from an ACL injury, and may need some time before he’s back to full health.

Additionally, hey could also find themselves without Jason Pierre-Paul, Ryan Jensen, Ronald Jones II and Fournette amongst other names.

Most importantly, the Bucs will want Brady to come back for another season. While he is currently still under contract, he has been noncommittal about returning to play again next year.

While his departure would hurt the team greatly, the team is still full of talent. With or without Brady, the Bucs will try to remain one of the top teams in the NFC and continue their recent success.