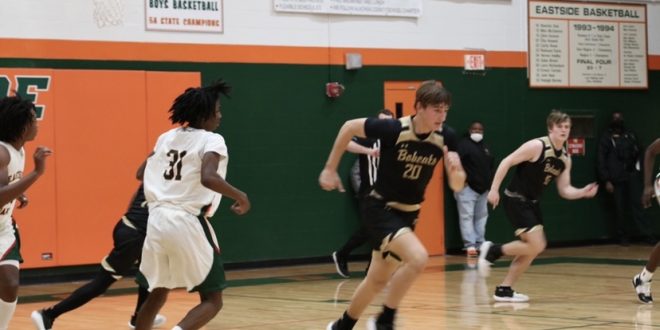 On Saturday night the Buchholz Bobcats fought to take home a victory over the Eastside Rams with a final score of 49-42. Buchholz just came off a devastating loss the night before to the Santa Fe Raiders. The Bobcats were eager to make a comeback and that they did. Senior #0 Daryus Boyd was the top scorer for Buchholz with 11 points, followed by sophomore #20 Anthony Wilkie with 10 points.

Both the Bobcats and Rams offense came into the game with a slow start. Eastside scored first with #30 Mike Cottrell putting up 2 points. Shortly after, #14 shot a three-point field goal which was followed by #31 completing ½ free throws for the Rams. Buchholz was struggling to get on the scoreboard. With 4:16 left in the first, the Bobcats were down 0-6.

Buchholz Head Coach Blake Golden advised his players to “Get down there and grind, play together and take your time”.

With 2:30 left in the first, Buchholz senior Aamari Reaves completed a three-pointer, placing the Bobcats on the scoreboard.

Buchholz sophomore Anthony Wilkie followed with a completed free throw, and shortly after, two more. Buchholz guard Nate Muchnick made a layup and Eastside’s #21 Ben Davis responded with two points to close out the first.

The Bobcats trailed the Rams 8-13. At the end of the 1st, Coach Golden pulled the Bobcats aside and said “We’ve gotta continue. Make basic plays and execute them well.”

Opening the second, Anthony Wilkie made a layup for the Bobcats bringing the score to 10-13. Following, Buchholz Senior Hayden Findley tipped it in and Eastside countered with a free throw completion by #44 senior Calvin Cooper.

Immediately after, Daryus Boyd completed a layup. The Bobcats were now down by one, 14-15.

The offense of the two teams was neck and neck as both teams fought for the lead throughout the second. Buchholz sophomore #35 Palmer Walton completed back-to-back plays bringing the Bobcats to trail closely behind the Rams 20-21.

Afterward, Coach Golden called for a timeout. The refs did not hear, allowing the Rams to put up two. Buchholz finished the first half with a layup scored by #1 Tyler Gainey. The Bobcats were down by five at the half, 22-27.

During halftime Coach Golden instructed his players to increase their energy and keep the fight.  Senior guard Daryus Boyd explains the focus of the Bobcats’ efforts coming into the second half.

The third quarter began as a continuation of the second with the Bobcats trailing close behind the Rams. However, the energy began to intensify late into the third as Buchholz persisted.

With 2:12 left in the quarter, #10 senior Colsen Orth secured a three-point field goal that sparked the energy Buchholz had coming into the fourth. Although the Bobcats were down 32-38 at the bottom of the third, they kept the fight.

Fight in the Fourth

Daryus Boyd and Anthony Wilkie set the stage for Buchholz in the fourth quarter with an electrifying performance. Entering the final quarter, Anthony Wilkie completed a free-throw and followed with a layup placing the Bobcats down by one 37-38.

Soon after, Daryus Boyd executed a three-pointer tying the game for the Bobcats 40-40 with 5:11 left in the fourth.

Daryus Boyd shoots a three and ties the game for the Bobcats with 5:11 left in the fourth.
40-40@buchholzbkb @ThePrepZone pic.twitter.com/2O4PQ2zDeT

Immediately, Boyd had a back-to-back play, scoring a layup and allowing the Bobcats to take the lead 42-40. Then, Aamari Reaves drills a three-point field goal for the Bobcats who are now leading by four points 46-42.

Closing out the game, Colsen Orth seals the deal with a solid three allowing Buchholz to defeat Eastside with a final score of 49-42. Head Coach Golden comments on the exceptional performance of the players.

Assistant coach Alan Findley had one word to describe what he was proudest of from the Bobcats’ performance tonight. That same word was what he would like the team to focus on looking ahead. That one word was “fight”.

With the last few games of the season nearing, the seniors want to take in every second. Daryus Boyd comments on playing in his senior season.

“I’m focusing on taking everything in. This is my senior year and I’m trying to enjoy everything.” – Daryus Boyd

Ellie is a second-year sports and media journalism major at the University of Florida.
@ellie_shreve
Previous Gators Women’s Basketball beats No. 11 LSU 73-72 in Thriller
Next Buccaneers Eliminated From Playoffs as Their Comeback Falls Short