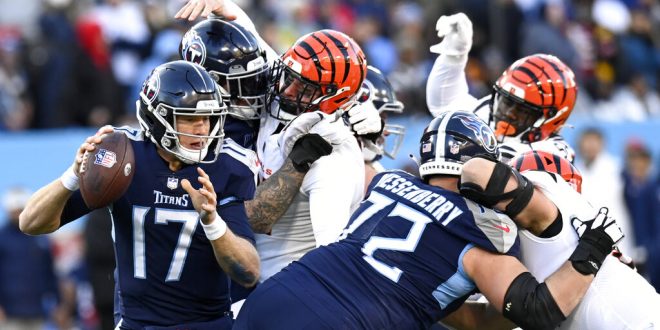 Tennessee Titans quarterback Ryan Tannehill (17) tries to pass in a collapsing pocket against the Cincinnati Bengals during the first half of an NFL divisional round playoff football game, Saturday, Jan. 22, 2022, in Nashville, Tenn. (AP Photo/Mark Zaleski)

The Tennessee Titans suffered another crushing loss to fall out of the AFC Playoffs on Sunday. This time it was as the number one seed in the conference and happened at home in Nashville.

Tennessee could not take advantage of the bye week or home-field advantage as they lost to the Bengals 19-16. Tennessee has now made the Playoffs four of the last five years but has failed to reach a Super Bowl. In fact, they have only advanced past the divisional round one time in those appearances.

While the Titans have been one of the most successful AFC teams recently, they hit a wall after this loss. While recent years have left hope, this year has left a lot of questions about the future in Nashville. This offseason could be one that either helps the Tennessee Titans take the next step, or keeps them in this purgatory.

What is next in Tennessee? Lets take a look.

Is Ryan Tannehill The Answer?

The fact this question is still being asked after the 11th year of Tannehill’s career is not promising. If a team does not know about their quarterback after his age 33 season, they should probably get the hint.

The former Miami Dolphin revitalized his career in his first two years in Tennessee. Giving Tannehill a good offensive line and an elite running back in Derrick Henry was exactly what he needed. He thrived in his first two years, completing 67.3% of his passes for 55 touchdowns, 13 interceptions and a 110.6 passer rating.

However, Tannehill took a big step back in 2021. Weirdly enough, he was pretty much the same exact quarterback with and without Henry in the lineup. With Henry, Tannehill completed 65.6% of his passes  for 10 touchdowns and 7 interceptions. That was good for a 90.2 quarterback rating. Without Henry, he completed 68.7% of his passes, threw 11 touchdowns and 7 interceptions and an 89.0 passer rating.

TANNEHILL PICKED OFF LATE IN THE FOURTH

All that was only good enough to see Tannehill finish 20th in passer rating (89.6), one spot behind his replacement in Miami, Tua Tagovailoa.

Tannehill is a solid quarterback, but Tennessee has to look in the mirror. After seeing so much young QB talent on display in the AFC this weekend, they have to consider an upgrade. Quarterback is the most important position in all of sports, and it is really hard to go all the way without an elite one. With so many elite quarterbacks in the conference, the Titans need one that can keep up with them.

The future of the AFC is BRIGHT ⭐️ pic.twitter.com/NYY0DP4J2f

At this point, asking whether or not Tannehill is elite should give away the answer. He is not. He is a fine quarterback, good enough to get your team to the playoffs, but it has become pretty clear he is not good enough to take one to the promised land.

With two Super Bowl winning quarterbacks in Aaron Rodgers and Russell Wilson possibly looking for new homes, Tennessee should seriously consider getting in those sweepstakes. They have the defense and the running back to carry them a long way, but they do not seem to have the quarterback to go all the way.

Looking To Next Year

The good news for the Tennessee Titans is pretty simple: Derrick Henry still exists. Their star running back was hurt most of the season, but made it back for last Saturday’s game. He did score a touchdown, but he just did not have the impact he usually does as he carried the ball 20 times for just 61 yards.

Next year brings promise, however, that he will be fully healthy and ready to rumble. Henry finished ninth in the league in rushing despite only playing eight games and seventh in the league in touchdowns. He is one of the most dominant forces in the league and as long as he’s in the backfield, Tennessee’s offense will have success. Also, if they decide to keep Tannehill, a full season with Henry should allow for a bounce-back year.

More good news is that the Titans are keeping most of their defense around. Tennessee will have just one starter hit free agency this offseason from a defense that has been stout for years. They tied for fifth in points per game this year, allowing just 20.8 points per game. They finished 11th in the league in yards per game, allowing 329.8 yards per game.

The way this Titans team is currently constructed will always have them as a playoff contender. They are good on offense, they control the clock with the run and make things easy on the quarterback. Tennessee is also in a weak division that they will be favorites to win.

The Titans have a recipe that has worked for a long time in the NFL, but it is starting to become outdated. With so much talent at quarterback around the league, it is becoming harder every year to win without an elite quarterback. It is also really hard to win with defense and without a high-flying offense.

This could be a franchise-defining offseason in Nashville as they search for answers to one question: is this style of play still a recipe to win a Super Bowl in today’s NFL?

If the answer is no, a lot of change could be coming for the Tennessee Titans.