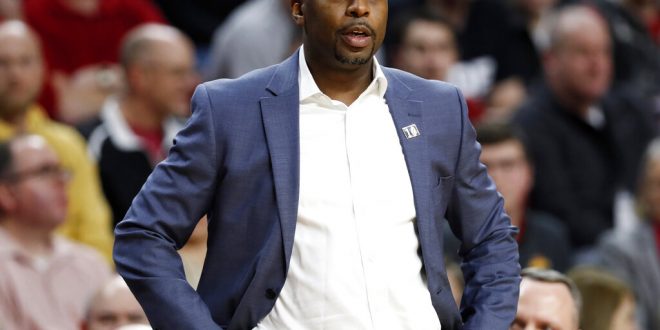 FILE - In this Jan. 21, 2020, file photo, Oklahoma State head coach Mike Boynton watches from the bench during the first half of an NCAA college basketball game against Iowa State in Ames, Iowa. Oklahoma State will learn much about where its men’s basketball program stands now that Cade Cunningham is in Detroit after being the top pick in the 2021 NBA draft. Coach Boynton has reason to believe the Cowboys will remain competitive. (AP Photo/Charlie Neibergall, File)

The Cowboys came into the season with dampened expectations, but hopes were high. Oklahoma State was coming off a successful 2020-2021. They were able to win 21 games and make it to the second round of the NCAA tournament. Cowboy fans were ready for success.

Before the season began the NCAA announced that Oklahoma State will be barred from the NCAA tournament for the 2022 season. This news comes from a 17-month fight over tampering coach controversy involved with the Cowboys and three other college schools.

Nineteen games later, the lasting effects are evident. The Cowboys are battling to stay above 500 and have not been able to put anything together. Coach Mike Boynton said this about the effect the news had on the team.

This team has struggled to score. Their offense averaging 69.4 points a game which puts them tied for 252nd place on the collegiate Division I level. The team also only has Bryce Williams and Avery Anderson that average over 10 points a game. Without consistent scoring, the team won’t be able to win games.

It comes down to shooting in the offensive scheme, the Cowboys are shooting 29% from three, and this number will kill any team’s chance of being competitive. Boynton rated what he thought of the offense this season.

Oklahoma State lost by three to the 24th ranked Iowa in their last game. A loss is a loss, but the Cowboys put up 81 points on a 47% success rate. Anderson had 34 points.

With a proven gritty and explosive defense under coach Boynton, the team can take this offensive explosion and play into it.

Furthermore, the Cowboys have the possibility to take this into Gainesville. The Gators are struggling. Coming off the backs of two losses the team has struggled to move forward.

If the Cowboys explode on offense and get a win in the O’Connell Center, they are poised to change their fate in the 2022 season.