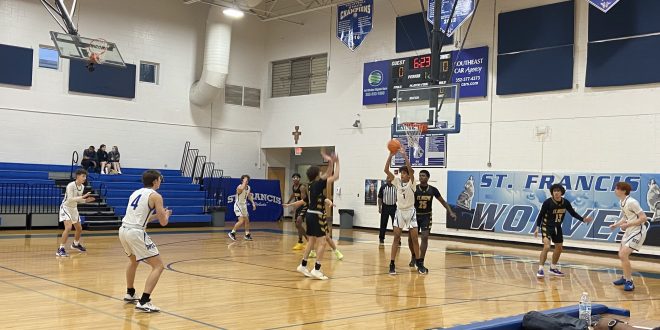 By Scarlett Cooney and Shailey Klein 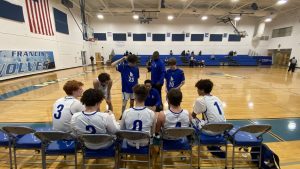 St. Francis and St. Joseph both started slow offensively in the first quarter, only putting up nine points apiece. The low-scoring first quarter can be credited to stellar defense by both squads. Wolves sophomore guard Ty Powell closed out the quarter with a layup to tie the score.

With a burst of energy in the second quarter, the Flashes began their reign over the Wolves, with junior center Larry Mitchell making a layup to extend the Flashes’ lead 20-12. Mitchell was a force to be reckoned with, relentlessly crashing the glass on every shot. In addition to having a dynamic offense, the Flashes’ lockdown defense forced back-to-back turnovers for St. Francis with just under two minutes left in the half. Flashes junior forward Andy Gonzalez closed out the half with a jump shot, resulting in a 26-14 score over the Wolves going into the break.

St. Joseph’s Andy Gonzales knocks down a jump shot to conclude a dominant first half for the Flashes

St. Joseph’s Mitchell flies in for a huge block. The Wolves call a timeout as they try to break their shooting slump

As the game came to a close, St. Joseph’s sophomore guard Josh Wolff came off the bench to score his second three of the night. The Flashes dominated both sides of the ball, with a final score of 57-19. According to the Flashes’ leading scorer, Larry Mitchell, the team entered tonight’s matchup focused on pulling out the victory.

Although the Wolves struggle with competing against older and more experienced squads, Torres is calling on his team to step up.

“It comes down to them playing above their years. Nobody cares if they’re freshmen or sophomores, they’re playing varsity basketball so they have to play to that level or get left behind.” –  St. Francis Head Coach Emanuel Torres

Coach Torres also knows that his team will need to fight for all 32 minutes of the game if they hope to win their upcoming games. 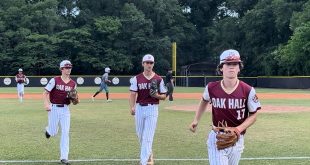