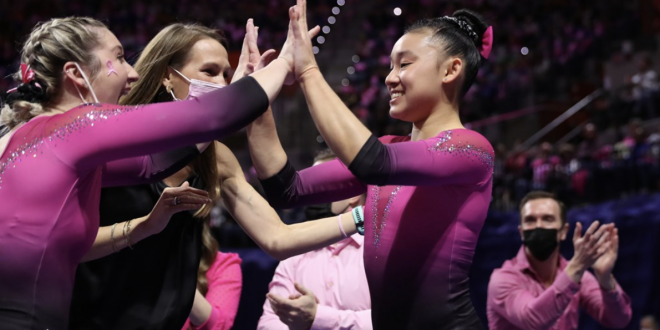 As with every home meet, the Gators opened on the vault and Arkansas took to the bars.  Florida got off to a huge start, dropping a 9.750 and counting only 9.875 scores and above.

Senior Trinity Thomas led the way with a near-perfect score. She closed off the event with a 9.975, putting the Gators at 49.550 after rotation one.

Arkansas struggled on their opening event, not receiving a score above 9.850. Graduate student Maggie O’Hara anchored the event for the Razorbacks and was forced off the bars, resulting in a 9.025. While the score didn’t count towards the Arkansas’ total, it meant they had to keep a 9.625 from junior Kiara Gianfagna.

The momentum continued for the Gators in rotation two as Florida took command of the bars and registered five scores above 9.900.  Freshman Leanne Wong led the way, getting her first 10.0 of her young collegiate career. It was also the first 10.0 in the nation on the uneven bars and the first 10.0 from a freshman this year.

“One of my goals this year was to get a 10 so very happy I accomplished that goal,” Wong said, “I just had to focus on what I needed to do.”

Florida’s Savannah Shoenherr also tied a career-high with a 9.975 giving the Gators a massive 49.725 on the apparatus. That score was the nation’s highest this season and tied a program record.

Arkansas put up a steady showing on vault. The Razorbacks avoided any major mistakes, and graduate student Sarah Shaffer and senior Kennedy Hambrick both scored 9.850 on the event.

But Florida kept their lead growing and pushed out ahead by 1.475 points halfway through the meet.

Thomas completed the “Gym-Slam” against Alabama on January 16, and she added yet another perfect score on beam this week.  Thomas put up the third 10.0 of her career in just her second appearance on beam this season. Her score was also the first 10.0 on the event in the country.

“I’m honestly never complacent,” Thomas said, “I always know I can do a little better and I work my butt off in the gym, and I get mad when I mess up at the smallest things, so I am probably my biggest critic and probably put the most pressure on myself. I expect myself to perform at my best.”

Senior Leah Clapper nearly followed Thomas with a perfect score of her own but came up just short with a 9.975. One judge evaluated her performance as a 10.0 but the second judge gave her a 9.950.

The Gators continued to put up a stellar performance on the night with a beam score of 49.700, also the nation’s highest this season and another tied program record for Florida.  Arkansas closed off their floor rotation with a 9.900 from senior Bailey Lovett. Four of the five scores that counted towards the Razorbacks’ total were higher than 9.800.

The 49.200 from Arkansas on floor wasn’t enough to close the gap as Florida expanded their lead even further.  Heading into the fourth and final rotation, Gators were up 148.975-147.000.

As Florida took to floor and Arkansas got on the balance beam for the final rotation the meet, the competition was heavily in the Gators’ favor.

Arkansas didn’t stop fighting and put up a solid rotation on beam. With four of their scores at a 9.900 or higher, the Razorbacks managed to close the gap just a little. Three Razorback gymnasts contributed 9.925’s to the final score.

With that said, it was just too little too late.  After Arkansas finished their final routine on beam, they gathered around the floor to cheer on Florida’s Nya Reed as she closed out the night.

“I think the sport is super special and honestly it’s a small world,” Thomas said, “The gymnastics family is just kind of that, a family, so we all support each other win or lose.”

The senior from Landover, Maryland, ended the night with the highest score on floor exercise at 9.950.

“It was an amazing night for the Gators,” head coach Jenny Rowland said, “Really started strong on that first event and just kept that momentum going from event to event.”

Wong took her first all-around title of her freshman season. She finished with a score of 39.625 on the night.

“It’s just really exciting to have the all-around title, doing all four events and just getting to competing every single week,” she said.

With their perfect scores, Thomas and Wong took the event titles for beam and bars, respectively.  Thomas also added a vault win to her resume with a 9.975.  Reed finished the night winning the floor exercise for the Gators with a 9.950.

Arkansas will host West Virginia on Friday and Florida will travel to Missouri.

Chris Will is a second-year journalism student with a focus in sports and media. Originally from the Fort Lauderdale area, Will is now the beat reporter for Florida Gymnastics and covers all things sports in Gainesville.
@_Chris_Will_
Previous Oak Hall’s Comeback Attempt Comes Up Short Against Keystone Heights
Next Williston Holds Off State Ranked Newberry in 56-48 Victory