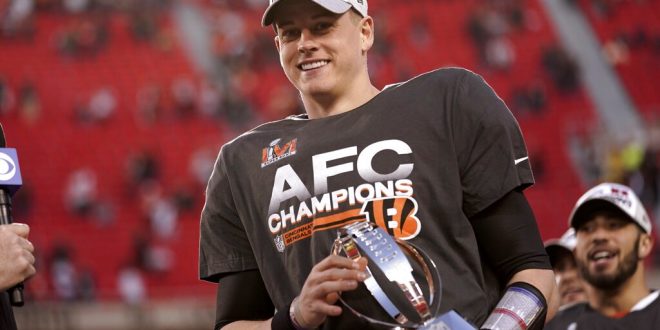 Joe Burrow started out his football career at Ohio State University in 2015. After graduating  from OSU, he transferred to Louisiana State University, where joined a graduate program and the football team. After playing two seasons, Joe Burrow brought the Tigers to win the National Championship. Then, he entered the NFL draft, and the Bengals selected him as the first pick of the  draft. Only being on the team for two season, Burrow lead his team to Super LVI.

At the end of regular season, Burrow took home the Heisman Trophy against Justin Fields, Jalen Hurts and Chris Young.

The College Football National Championship No. 1 LSU took on the No.2 Clemson Tigers on Jan. 13, 2020. The LSU Tigers took the Mercedes Benz Superdome by storm and beat Clemson 42-25.

In 2020, the Cincinnati chose Burrow as the number 1 pick in hopes that he would change their team and bring them to a super bowl in the distant future.

Only being on the team for two seasons, Burrow did the unthinkable and carried his team to this year’s Super Bowl. He talked about coming into his first season he would be shocked, but this season it was an expectation.

Borrow mentioned that if anybody told him at the beginning season that the Super Bowl would be in his future he would not believe anybody. The Super Bowl is something for any athletes to be excited about once they made it there.

At the end of the AFC championship, the Chiefs’ fans left, and the Bengals fans stayed to watch their team accept the trophy and celebrate with Burrow and their team.

Previous The Rams and Bengals Relish Another Opportunity for a Championship
Next What’s next for Kansas City Chiefs?