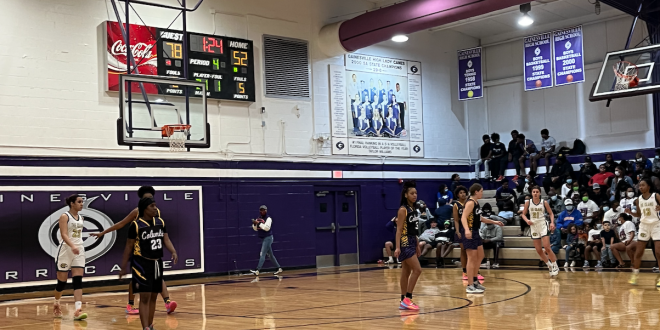 In their Wednesday night semifinal against the Fleming Island Golden Eagles, the Columbia Tigers made one thing clear; they are not going anywhere anytime soon. The Tigers put forth what may have been their finest outing of the year in an 80-56 win.

Columbia senior Na’Haviya Paxton led the charge with 23 points (19 in the first half alone). Fellow senior Annzarria Jerkins also had a strong game, chipping in with 21 points herself. While Paxton and Jerkins had strong offensive performances, their defensive activity proved to be the Tigers’ key to victory.

The Tigers immediately started off with a bang, taking a 10-4 lead within the first three minutes. Fleming Island called a timeout to halt Columbia’s momentum, but it ended up having the opposite effect. During the break, Tigers head coach Anthony Perry encouraged his team to continue pressuring the Golden Eagles on defense.

The Tigers have started off tonight’s game on an impressive 10-4 run. Their bread and butter so far has been converting turnovers on defense into fast break points on offense. See what head coach Anthony Perry had to say to his team: pic.twitter.com/YedhHLxPHt

The team heard Perry loud and clear, and his message translated into results as the quarter went on. The Tigers proceeded to go on an 18-6 run after the break, with fast break points being their main source of scoring. They played very aggressive defense that resulted in multiple steals for Paxton and Jerkins in the first half alone. The entire roster followed suit, trapping Golden Eagles ball handlers in the backcourt to force even more turnovers.

Paxton played a key role in the team’s success in the fast break. Her speed and overall skillset allowing her to control both ends of the floor.

Columbia remains in firm control of the game, leading Fleming Island 44-24 at halftime. Senior Na’Haviya Paxton already has 19 points, including this drive to the basket at the end of the second quarter. Fellow senior Annzarria Jerkins has also had a strong outing with 10 points. pic.twitter.com/rMosP19Zpi

“I know that I’m very hard to guard,” Paxton said. “I’m pretty fast [and] I’m shifty, so I wanted to get to the goal easy, and I really wanted to win.”

Entering the second half with a 44-24 lead, Columbia did not let up as the game went on. The Tigers remained active in pressing the Golden Eagles in the backcourt, holding them to just eight points in the third quarter. Eventually, as they entered the fourth quarter with a 60-32 lead, the Tigers pulled their starters and coasted to victory.

Tonight’s win was more than just an impressive outing for the Tigers. It served as a message to anyone that may still be counting them out. While they entered tonight with a 6-13 record, Perry noted that his roster has faced one of the more difficult schedules in Florida, and they hoped having tough competition would make them stronger. Based on tonight’s results, it appears their strategy paid off for what he called “part two of [their] season”.

“Our mentality is, as it’s always been, there has been a lack of respect for [the] Columbia high school girls basketball program over the years,” Perry said. “We can’t argue with those that do the rankings and the seeding, but what we can do is prepare ourselves… and play just like we know that we can play.”

Championship on the Horizon?

Wednesday’s win clinched Columbia’s berth in the 6A District 3 championship game. They will face the #1 seed Gainesville Hurricanes this Friday at a time yet to be determined. The Tigers are no strangers to being underdogs, and they will look to knock off the Hurricanes to continue their postseason run at the regional level.

“We’ve played… Gainesville and we know them well,” Perry said. “We’re going to take that same mentality, we’re going to prepare, and whoever we match up against, we’ll be ready.”

Jack Meyer is a second-year student at the University of Florida. He is majoring in Journalism and specializing in Sports and Media.
@jackmeyerespn
Previous Gators Men’s Basketball Rally Back to Defeat Missouri 66-65
Next Buchholz Takes Home a Victory Over Vanguard