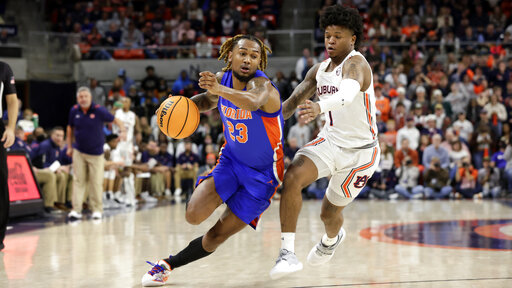 Florida guard Brandon McKissic (23) drives to the basket around Auburn guard Wendell Green Jr. (1) during the second half of an NCAA college basketball game Saturday, Jan. 8, 2022, in Auburn, Ala. (AP Photo/Butch Dill)

Auburn is coming off a 94-80 win over Vanderbilt, where Jabari Smith put up 31 points for the Tigers. Florida is coming off of back-to-back losses to Kentucky and Texas A&M. The Gators are looking to redeem themselves with much-needed wins to secure a spot in the NCAA Tournament.

Earlier this season, Auburn defeated Florida 85-73, gaining their 11th straight win and 3-0 SEC start to the season. The Gators were the first team to put up 70 points against Auburn since Connecticut.

In Florida’s and Auburn’s last matchup, Castleton outplayed Kessler. Castleton scored 22 points with 10 rebounds, while Kessler fouled out with only six points for the Tigers. Kessler will look to make a comeback against Castleton as the two centers go head-to-head in the rematch on Saturday. If Kessler wants to redeem himself against Florida, he must refrain from foul trouble.

Why Florida Could Win

Auburn is undoubtedly the team to beat. However, Auburn’s offense has been a bit rusty as of recent. The Tigers lost their No. 1 ranking after falling to No. 27 Arkansas in overtime and scraping by a one-point win over Missouri and a two-point win over Georgia.

Auburn also has a fouling problem. In their last game against Florida, the Tigers had three of their top-scorers benched for much of the game due to foul trouble. The Gators perform well at the line and know how to get there. Florida’s performance at the line is what allowed the Gators to put up 70 points against Auburn in their last match in January.

Florida has a dynamic defense, as they rank No. 18 in the nation in steals. The Gators average 8.6 steals per game, and are No. 66 nationally in turnover margin. The Gators will need Brandon McKissic, Tyree Appleby, and Phlandrous Fleming Jr. to present strong performances on the court on Saturday.

Why Auburn Could Win

The Tigers are 24-2 and 12-1 SEC, which should say enough. Auburn did begin to struggle offensively, but they have proven themselves in the game against Vanderbilt. The Tigers put up 94 points and had one of their best shooting games of the season.

Jabari Smith sparked the Tigers’ offense with seven three-pointers against the Vanderbilt Commodores.

While Auburn is last in the SEC for defensive rebounds, the Tigers will make up for it on the other end of the court.

Jabari Smith was LIGHTS OUT ♨️♨️@jabarismithll is the first @AuburnMBB player with 30 points on 60% shooting in an SEC game since 2014! pic.twitter.com/DtX9KBVBx1

However, Florida cannot say the same as the team struggles with three-pointers. The team is No. 321 in completed three-pointers but No. 25 in three-point attempts. The Gators have an aggressive defense but struggle offensively. Florida Head Coach Mike White comments on Florida’s performance following the devastating one-point loss to Texas A&M.

Under Coach White, the Gators are 5-3 against Auburn, with 4-0 at home. Florida looks to continue the home game winning streak over the Tigers but realizes they must put forward their best performance to do so. The Auburn Tigers are favored by 64.5 percent, but the Gators are eager to steal the show. The game is sold out at Stephen C. O’Connell Center and fans are ready to rally for the Gators. Former Gator and Oklahoma City Thunder point guard, Tre Mann, will return to the O’Connell Center for the game.

Ellie is a second-year sports and media journalism major at the University of Florida.
@ellie_shreve
Previous Florida women’s hoops look to play LSU
Next Behind A Dominant Mound Performance From Barco, Gator Baseball Wins Opener