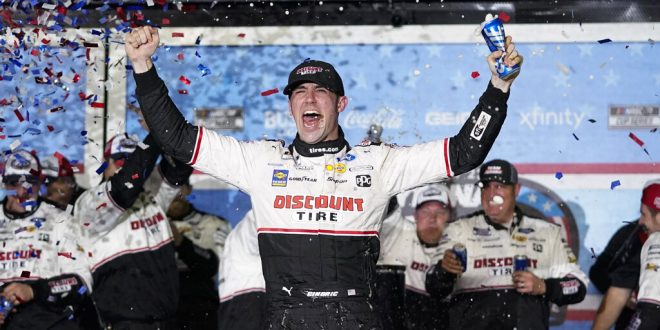 Austin Cindric has won the Daytona 500. In a photo finish, the rookie now has his first NASCAR Cup Series win. Notably, his victory fell on team owner Roger Penske’s eighty-fifth birthday for his third win as an owner.

Cindric took the lead at the beginning of the two-lap overtime decision by taking the outside lane. Bubba Wallace finished in second place by 0.036 seconds. In third place came Chase Briscoe, which marks his best placement so far in his career. Then, despite blocking teammate Ryan Blaney in the final stretch, Blaney gave Cindric the winning push in order to get the team win. Blaney ultimately finished in fourth due to the sacrifice.

The final few laps were not pretty with some. With five to go, Keselowski gave Ricky Stenhouse Jr. a shove that sent him into the wall. Buescher Wallace both suffered some damage as well as a result.

After the race, Cindric expressed his gratitude towards his teammate and a happy birthday to owner Penske. Blaney did not make a comment on getting blocked, but he did reveal his motives.

“I wanted to try to win the race for Roger Penske,” said Blamey, “Whether that was me or another car, that’s what I was doing.”

Brad Keselowski and Cindric are tied with each other at 54 points, with Cindric listed in first. Then, Martin Truex Jr. is third with 49 points. Wallace is sitting at fourth with 47 points. Finally, Briscoe and Blaney are also tied at 41 points.

Ryan Blaney said he didn’t want to make any move on Austin Cindric unless he knew one of them would win the race. His thoughts on the final lap: pic.twitter.com/pztv1ZAovJ

Parker Welch is a Senior at the University of Florida majoring in Sports Media at the College of Journalism & Communications.
@parkerrwelch
Previous Gator men’s win tenth consecutive SEC swimming and diving championship
Next 2022 Winter Olympics wrap up