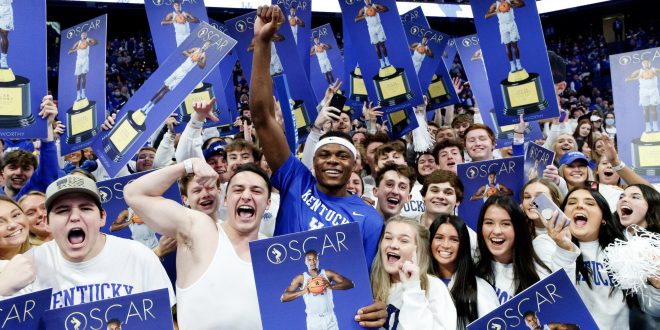 Kentucky Men's Basketball's Oscar Tshiebwe scored 17 points and grabbed 16 rebounds in a win against the LSU Tigers on Feb. 23, 2022 (via @KentuckyMBB on Twitter)

The Kentucky Wildcats improve to 23-5 on the season after beating LSU Wednesday night thanks to a strong performance from Oscar Tshiebwe. Kentucky won by a score of 71-66.

LSU looked poised to upset the nation’s No. 6 team, going into halftime with an eight point lead. Senior guard Xavier Pinson led the way for the Tigers in the first half with 16 of the team’s 31 points.

Kentucky’s junior forward Oscar Tshiebwe did his best to keep his team close, scoring 12 of his team’s 23.

Kentucky received a lot of offensive production from the free throw line. They scored 23 free throws out of 32 attempts. That accounted for just under one-third of the team’s total points. Tshiebwe made 7-11 free throws.

LSU performed much better than Kentucky from the three-point line. They shot 9-26 from three to Kentucky’s 2-12.

The top scorers for both sides were Xavier Pinson for LSU with 26 points and Oscar Tshiebwe for Kentucky with 17 points and 16 rebounds.

Tshiebwe’s rebounding performance means he has grabbed the most rebounds by a Kentucky Men’s Basketball player in a single season in the last 50 years. He also passes Julius Randle and Anthony Davis on Kentucky’s all-time single-season rebounder list.

Tshiebwe said after the win that LSU was good competition. He saw the game as great preparation for his team who play ranked Arkansas next.

Tshiebwe also said he is proud to be a part of this Wildcats team because every play is ready to go at a moment’s notice.

Next for Kentucky, they take on No. 18 Arkansas. LSU plays Missouri.

Jensen Young is a journalism student at the University of Florida. He works as a sports writer for WRUF.com and is the voice of trendings on Wednesday mornings on the WRUF radio station.
@Jensen_Young9
Previous No. 3 Auburn Bounces Back
Next Women’s Hoops: Gators Look to Bounce Back vs. Vanderbilt