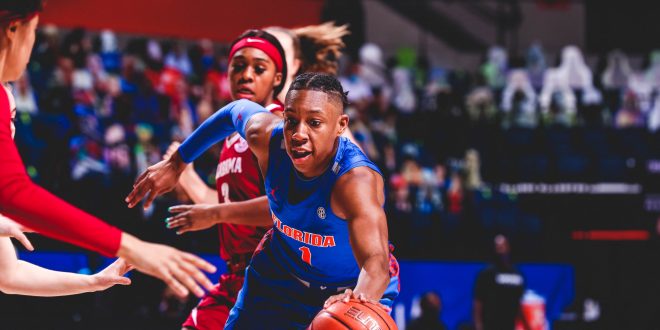 Women’s Hoops: Gators Look to Bounce Back vs. Vanderbilt

The Florida Gators (20-7) take on the Vanderbilt Commodores (12-16) in a women’s basketball SEC matchup this evening.

After Vanderbilt, the Gators will play their final game of the regular season at Missouri on Sunday. Then, they’ll be aiming their focus at the SEC tournament and March Madness.

All things considered, this has been a successful season for a Florida team projected before the season to finish outside of the SEC’s top 10. Despite the transfer of guard Lavender Briggs and the challenge of getting acclimated to an interim head coach, the Gators found a groove and are now riding fairly high as the regular season comes to a close.

Though, the Orange & Blue are coming off of a crushing loss to the now-ranked No. 8 LSU Tigers. The Gators led, but let it slip away late. Florida turnovers and a major free-throw disparity in favor of LSU tell the tale.

The Gators’ leader in points, rebounds, assists and steals – Kiara Smith – struggled against the Tigers. In a laborious 40 minutes, she shot just 5-14 from the field, missing both of her three-point attempts. She was, though, able to pitch in six rebounds and six assists.

Entering the game against Vanderbilt, the most recent top-level production for Florida actually came from guard Nina Rickards. She was able to put together an impressive 17 point, nine rebound performance against LSU on 50% shooting. That type of output on the boards from a guard is impressive. That type of rebounding from a 5 foot 9 guard – it’s unheard of. She has a motor in her that the Gators will need in the final two games of this regular season and beyond.

The story of the Commodores’ season thus far can’t be told with quite the same triumphant tone as that of the Gators’. They currently sit at 3-11 in SEC play and 12-16 overall. Looking down in the SEC standings, they see only Auburn below them. They’ve lost 11 of 13 and six in a row, most recently coming off of a ten-point loss to Ole Miss.

Forward Brinae Alexander, in addition to guards Iyana Moore and Jordyn Cambridge, carry the majority of the load for Vandy. They combine for 37.4 points per game, just over 60% of the Commodores average scoring output.

Looking ahead against the Gators, Vanderbilt is going to need huge, efficient nights from all three.

It’s been quite some time since we’ve seen this matchup. The Gators’ and Commodores’ women’s basketball teams last played each other on Jan. 1, 2020. In that game, Florida took care of Vanderbilt 68-60, led by Kiara Smith and former guard Lavender Briggs. Over two years later, Vandy looks up at the Gators with hopes of beating the odds and taking them down.

As teams, the Gators and Commodores actually have similar shooting splits. They’re both around 40% from the field, 32% from three and 70% from the line.

Florida has the slight edge in rebounding, assists and turnovers.

At the end of the day, as far as this season is concerned, the difference between these two teams is simple. The Gators consistently find ways to outscore their opponents, while the Commodores do not.

Deep-diving into the numbers will affirm that the Gators must be on their A-game tonight in order to win a game that they should – because, the Commodores are capable.

The Florida Gators are really good. They’re the better team.

But, the Vanderbilt Commodores are not to be taken lightly. They’re capable. They’re dangerous.

Zackary is currently studying Sports Journalism at the University of Florida. He has years of experience providing online content for various news outlets in every form, as well as experience running multiple sports-related social media accounts with high followings. He does work for WRUF / ESPN Gainesville by producing the radio broadcasts in addition to writing online content. Zackary's planned graduation is May 2024. Please feel free to contact via email at zackweiss48@icloud.com. Links to Zackary's social medias are directly below:
@zackweissespng
Previous Oscar Tshiebwe, No. 6 Kentucky continues SEC success, LSU loses again in conference
Next Questions arise surrounding futures for Rodgers and Adams in Green Bay