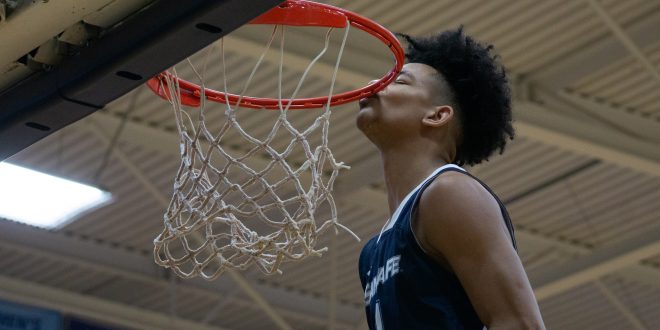 The Santa Fe Saints men’s basketball team celebrated winning the Central Conference with a net-cutting ceremony. The Saints have gone 24-5 overall and 12-3 in conference play. This is Santa Fe’s eighth conference title all-time and fifth under head coach Chris Mowry, but their first since 2012.

A Season to remember

Mowry is in his 17th season with Santa Fe and is the winningest coach in program history. This season Santa Fe has risen to the top of the conference thanks to Mowry’s coaching. The Saints have found success with unselfish play and stout defense. Mowry shared his thoughts on the season.

Standout Player in a stellar season

Santa Fe guard Bradley Douglas has had an incredible season thus far. He has averaged 15 points five assists, and four rebounds per game ahead of the FCSAA/NJCAA Region VIII State Tournament. Here’s what Douglas had to say on the season.

The Saints held a net-cutting ceremony on their home court Thursday, February 24th, to honor their fans and season. The Saints went undefeated at home (16-0).

Look ahead to the Tournament

The Saints will enter the state tournament as the number five seed and face off against Southern Conference runner-up and four seed Florida Southwestern State College Buccaneers and the game will be a road game for the Saints.  It will take place at 9 p.m. on Wednesday, Mar. 2.  This will be the second time the two teams will face one another as the Saints beat the Bucs in thrilling fashion (83-81) on Nov. 6, 2021.