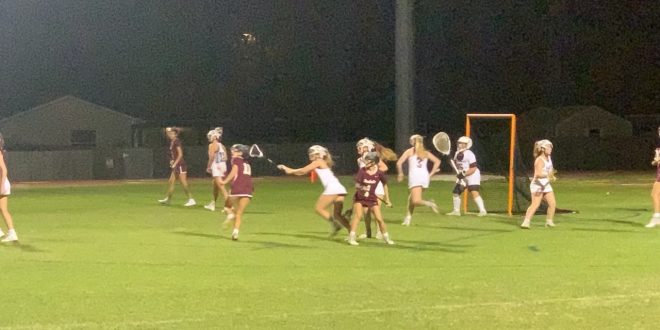 Lady Eagles defending the goal from the Yellow Jackets.

Oak Hall girl’s lacrosse gets their first loss of the season against St. Augustine 16-5. Previously, they had overcome their opponents by a wide score margin, defeating St. Joseph Academy 21-0. On the other side, St. Augustine has had a successful start to the season. Using their force to overcome their opponents. On average, making 18.6 points per game.

After a well-fought 50 minutes, the Eagles could not manage to calculate the Yellow Jackets’ offensive and defensive strategies. They felt short defensively early in the game and couldn’t come back in time.

The Yellow Jackets came on aggressively early on, pushing against the Eagle’s defense to get closer to the goal or attempt to steal. However, attacker Isla Montes found a hole in their defense and quickly placed Oak Hall’s first point on the board. St. Augustine is quick to respond as they effortlessly make their way through Oak Hall’s defenses to score. From then on, they struggle to maintain their defense against St. Augustine’s passing maneuvers.

Strategically, the Yellow Jackets had at least one girl cover an Eagle player, constantly moving and changing. They excelled in interceptions, which resulted in an impressive goal near the end of the first period. Their defenses improved as the Eagles approached their goalie. Always pressing them behind the goal and with little to no options.

In the last two minutes of the game, both teams were giving it their all. Running back and forth, trying to maintain control of the ball for enough time to score. The Yellow Jackets got the upper hand and scored in the last 20 seconds, making the score 10-4. Junior midfielder and attacker No. 1 Katie Cotter tried to score in the final five seconds but couldn’t get through Oak Hall’s defense. The Eagles ended the first period with four points, six shots, and two saves, while the Yellow Jackets had ten points, twelve shots, and two saves.

Head Coach Darren Johnson acknowledges what they did right and how the Yellow Jackets governed the game.

Oak Hall attempted to come back strong but struggled to assert dominance in the first ten minutes. On the other hand, St. Augustine’s starts with a calmer, more controlled offense. However, as soon as they saw an opening, they quickly changed their demeanor to an aggressive one to score. The Yellow Jackets, as a team, played very well, but they did have quite a few stand-out players.

No. 1 Katie Cotter and No. 10 Kendal Weber have been extremely valuable to the Yellow Jackets. Scoring goals, performing assists, and stealing the ball are just some of the few feats these girls have accomplished tonight.

The Eagles do not delay in response but couldn’t seem to pass the opposing team’s defensive tactics. For a split of a second, there seemed to be a falter in the Yellow Jackets defense, and the Lady Eagles took advantage. Letting Freshman midfielder and attacker No. 0 Harper Johnson score their first goal of the second period. The game ended with an 11 point margin. Oak Hall had nine shots and three saves, while the Yellow Jackets had 21 shots and three saves.

Coach Johnson praised some of his athletes on how they handled the pressures of the game and used it to their advantage.

The Lady Eagles will make their way to St. Johns, FL to go up against the Creekside Knights on Mar. 4 at 5:30 p.m. Although the team faced their first loss in the season, they will use what they learned to come back stronger and faster.

@_vanessa_sanch
Previous Chiefland secures their first win at home
Next No. 13 Tennessee Handles Lowly Georgia, Close In on Top of Conference