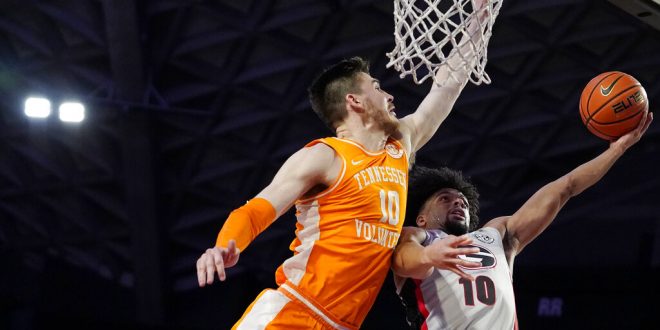 No. 13 Tennessee Handles Lowly Georgia, Close In on Top of Conference

As college basketball enters the final week of the regular season, conference wins become more and more valuable. Tuesday night, Tennessee took care of business against a Georgia team that has been glued to the bottom of the SEC for virtually the entire season.

In a game where Tennessee was expected to roll, it started quiet. The Vols walked into this game as 16-point favorite and saw the game tied at 35 going into halftime.

Tennessee turned the ball over seven times during the first half, and saw a scoring drought of over four minutes. The game remained neck-and-neck for the start of the second half, until Tennessee went on a 21-5 run from which it took the lead for good. Despite being double-digit favorites, Tennessee only won by seven with a 75-68 final. The win is still an SEC win, however, and it keeps Tennessee’s chances at a regular-season SEC title alive.

The Vols were led in scoring by junior guard Josiah-Jordan James. He set a career-high in scoring with 23 points, including shooting eight for 12 from the field. James also shot three for seven from behind the arc, with two big tree-pointers early in the second half to give Tennessee the lead from which they never looked back.

In addition to the scoring, James contributed offensively with eight rebounds and five assists. On defense, James added two blocks and two steals.

Alongside James, Kennedy Chandler was bright for Tennessee. The Vols’ star scored 16, giving him double-digit points for the fifth game in a row. Chandler also added four steals to his line, giving him 64 on the season.

Santiago Vescovi added another 11 points for Tennessee, along with five rebounds and three assists. John Fulkerson contributed the most of the bench players, as he scored 12.

Georgia was led by Aaron Cook and Kario Oquendo, who scored 17 and 16 points respectively. Cook also made four assists and three steals, while Oquendo made three rebounds, all of the defensive side.

Standings in the Final Week

The win keeps Tennessee in the race for the regular season crown of the SEC. The Vols currently sit with a 13-4 conference record, tied with Kentucky. Each sit a half game behind Auburn and a half game above Arkansas, both of which play Wednesday. All four of these teams are still in play for the regular season title. Should Arkansas lose to LSU and Auburn win over Mississippi State, Arkansas would be eliminated, leaving just Auburn, Kentucky and Tennessee.

There is a chance of all four teams being tied heading into Saturday. Should the scenario arise, it would make Tennessee’s game against Arkansas even more interesting. As for the other two teams, Auburn hosts South Carolina on Saturday and Kentucky is on the road at Florida.

Tennessee still has a shot at the Regular Season SEC title, but it needs Auburn to lose at least one of its two remaining games, on top of winning its own game with Arkansas.

Jack Shivertaker is a senior at the University of Florida pursuing a degree in Journalism with a focus on sports media.
@JackShivertaker
Previous Lady Eagles Lacrosse Get Their First Loss
Next MLB cancels games after failed talks