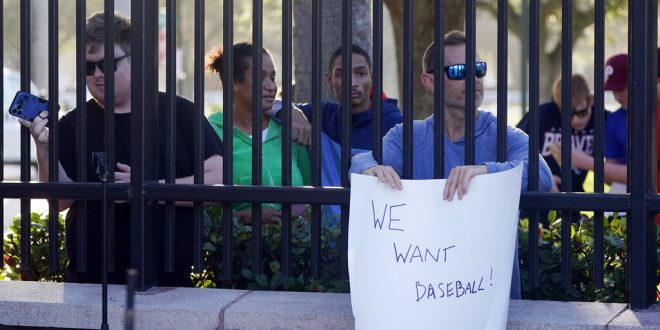 Baseball fans watch as Major League Baseball Commissioner Rob Manfred speaks during a news conference after negotiations with the players' association toward a labor deal, Tuesday, March 1, 2022, at Roger Dean Stadium in Jupiter, Fla. Manfred said he is canceling the first two series of the season that was set to begin March 31, dropping the schedule from 162 games to likely 156 games at most. Manfred said the league and union have not made plans for future negotiations. Players won't be paid for missed games. (AP Photo/Wilfredo Lee)

For the second time in three years, the MLB season will not start on time.

On Monday, the MLBPA and MLB failed to reach a new collective-bargaining agreement. Following the failed talks, MLB commissioner Rob Manfred announced the cancelation of the first two series of the season.

MLB’s final CBA proposal before its 5 p.m. deadline was unanimously rejected by the MLBPA, leading to MLB to postpone the upcoming season.

As far as renegotiating goes, Manfred explained that MLB is open to the idea of going back to the drawing board and renegotiating. However, there is not a specific schedule to begin renegotiations and no players will receive compensation for the canceled games.

“Our position is that games that are not played, players will not get paid for,” Manfred said.

“The concerns of our fans are at the very top of our consideration list.” — Rob Manfred, on the day MLB canceled regular-season games, during a league-initiated lockout

As far as the proposal is concerned, Manfred described the offer as “our best offer.” The offer included a variety of topics from the draft to player incentives.

Specifically, Manfred said the offer included the elimination of draft compensation and the addition of a draft lottery. Furthermore, the offer included incentives and offers for young top prospects including the rookie of the years.

“For the first time ever, we agreed to an incentive system to encourage clubs to promote top prospects on Opening Day,” Manfred said.

MLB also proposed the first and second place finishers for Rookie of the Year in both leagues would receive a full year of service.

With the cancelation of the first two series, the earliest date for a potential Opening Day would be April 8.

MLB season with a new CBA

ESPN MLB writer Jesse Rogers said believes that it won’t take long for a new deal to be in place and said renegotiations could start in a few days.

Additionally, Rogers said the future of the sport depends on the length of the lockout, saying a month-long lockout will cause damage for the league.

On the other hand, ESPN MLB insider Jeff Passan said it’s unclear when renegotiations could begin.

Following Manfred’s statement, a plethora of players took to social media to express their displeasure with the news.

First, the MLBPA released a statement calling the lockout a “culmination of a decades-long attempt by owners to break our Player fraternity.”

Mets’ pitcher Marcus Stroman voiced his negative opinion going as far as calling Manfred “Manclown” in a series of tweets.

This is just sad @MLBPA @MLB

Finally, free agent first baseman Anthony Rizzo left a message for the fans and younger generation of baseball players. Rizzo most recently played for the New York Yankees after being traded midseason from the Cubs.

To the fans we will miss you most. To the younger generation of baseball players, this is for you.

“We’re left with one of the darkest days in baseball history,” Passan said.

Previous No. 13 Tennessee Handles Lowly Georgia, Close In on Top of Conference
Next Arkansas and LSU Mens Basketball Battle For Seeding in Second Meeting This Season