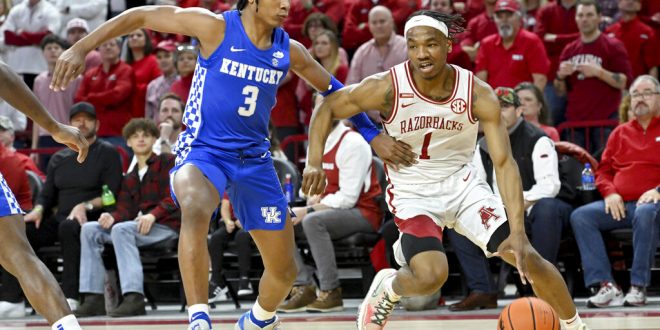 The Arkansas men’s basketball team will take on LSU for the second time this season Wednesday night in another SEC matchup.

Arkansas Quest for One Seed

The Razorbacks are guaranteed a top-four seed in the SEC Tournament with their record of 12-4. They would need plenty of help, though, to win the SEC Regular Season Championship outright.

First, they would need to win their final two games, including a game against Tennessee, and then have the Florida Gators beat Kentucky. They would also need Auburn to lose one of their final two games. With the Razorbacks beating Auburn earlier this season, Arkansas would have the tiebreaker if it were to tie.

LSU sits a half-game behind Florida and South Carolina with eight wins. If it wins Wednesday, it would still be in position to potentially move all the way up to the five seed with some help.

The Tigers would also likely need to win at least one of their final two games or make a significant run in the SEC Tournament to qualify for an at-large bid for the NCAA Tournament later in March.

This will be the second meeting of the season between Arkansas and LSU. The Razorbacks won 65-58 in their last game after finishing the game on a 17-2 run. Arkansas’ leading scorer JD Notae recorded 19 points which is right on his average this season.

Jaylin Williams hit a go-ahead three-pointer with a little more than a minute left in regulation. He recorded a double-double with 11 points and 13 rebounds.

For LSU, Eric Gaines scored 14 while the Tigers shot only 38% from the field and 26% behind the arc. Tari Eason has led them all year, and LSU has three other players averaging at least 10 points per game.

Tip-off is set for Wednesday, March 2 at 9 p.m. on ESPN 2 at Bud Walton Arena in Arkansas.