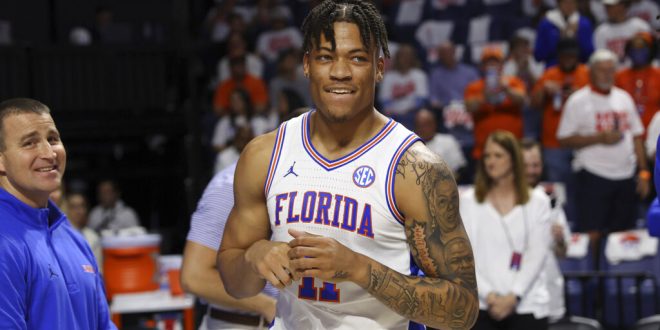 Florida forward Keyontae Johnson (11) smiles after being introduced as a starter before the first half of an NCAA college basketball game against Kentucky, Saturday, March 5, 2022, in Gainesville, Fla. (AP Photo/Matt Stamey)

It was a bittersweet day for the Gators Men’s Basketball team as they fall to the Kentucky Wildcats 71-63 on Senior Day. The Gators drop to 19-12 and 9-9 in the SEC while the Wildcats improve to 25-6 and 14-4 in the conference.

Coming off a win against Vanderbilt earlier this week, the Gators came into this one needing another signature win as they sit on the bubble of the NCAA Tournament. Currently, the Gators are one of Joe Lunardi’s Next Four Out.

Unfortunately for the Orange and Blue, they were tasked with stopping Oscar Tshiebwe who showed why he is the front runner for the Wooden Award. He was a stat sheet stuffer finishing with 27 points, 15 rebounds, three steals and two blocks. Once again, he was efficient going 11-16 from the field and 5-5 from the charity stripe.

Oscar Tshiebwe has recorded his 25th double-double of the season, the most by an SEC player in a season in the last 25 years. pic.twitter.com/YRQ51F5awR

Leading the way for the Gators was Colin Castleton who had 23 points and 11 rebounds. Anthony Duruji was the only other Gator that scored in double figures as he finished with 10 points. After back-to-back quality games Phlandrous Fleming Jr. scored just seven points but did so all from the free throw line. He was 0-9 from the field.

Senior Day for the Gators

Several Florida players were honored including Myreon Jones, Anthony Duruji, Brandon McKissic, Phlandrous Fleming Jr., Tyree Appleby and Colin Castelton. But none was bigger than Keyontae Johnson and the ovation he got.

Johnson was honored by the Gator faithful getting the chance to suit up and even got to start the game. It was a special moment for Johnson and his family as Johnson has not played since that scary moment in the 2020 game against Florida State.

Here’s what Johnson had to say about his relationship with Mike White, the program itself and the moment where kissed the court.

First Half is all Wildcats

The first half was all Kentucky although the Gators did have their moments. Tshiebwe posted a double-double in the first half with 12 points and 11 rebounds in the opening 20 minutes.

The Wildcats started the game on a 7-0 run and lead by as much as 16 with a 30-14 lead. However, the Gators would begin to show some life getting consecutive stops on defense and converting on the offensive end. They would cut the lead to eight points with just over three minutes to go. Kentucky found their grove again and went into halftime up 38-26.

Tshiebwe showed why he’s one of the best players in the country getting it done on both ends of the floor extending the lead once more for Kentucky.

He continuously attacked the Gator defense down low and from the mid range. Here’s what Gators head coach Mike White had to say about his team going up against the big man and the Wildcats.

With just over 10 minutes to go, Kentucky led by 13 but the Gators continued to fight. Unfortunately for the Gators, they couldn’t capitalize on their opportunities. Sahvir Wheeler was key for the Wildcats down the stretch finishing with 13 points.

The Gators trailed by as many as 14 with just over seven to play but again, consecutive stops and baskets kept the Gators in it. Still, the Wildcats were just the better team and showed why they’re a likely top two seed come tournament time.

Here’s what White had to say regarding his teams mentality throughout the game. He talks about not finishing possessions on the defensive end and how the deficit was too big to overcome with the way Florida was playing.

The SEC Tournament begins March 9 in Tampa, FL from Amalie Arena. John Calipari has his team locked into the SEC’s No. 3 seed while the Gators are tied for fifth with four other teams. As games wrap up on Saturday, the seeding for the tournament and tiebreakers will play itself out.

As for getting into the NCAA Tournament, a win on Saturday would have helped the Gators’ resume. If Florida is to go to the big dance, they’ll need to make a deep run or even win the SEC Tournament.