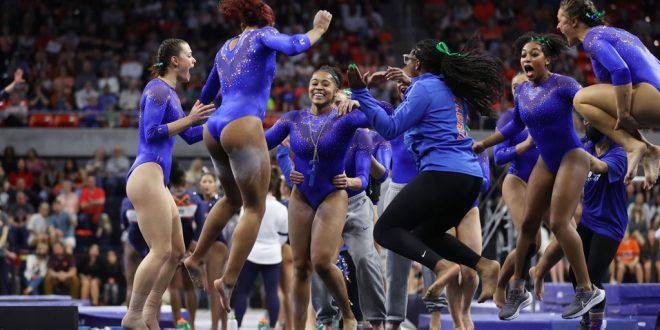 Florida celebrates with freshman Sloane Blakely after her first collegiate 10.0. The Gators and Auburn tied at 198.575 - the nation's high for 2022 and tied for No. 4 all-time in NCAA history. Photo By: Courtney Culbreath

This meet had it all. Drama, perfection and history were all on display as the Auburn Tigers took on the Florida Gators Friday night.

Four 10.0s and a final rotation comeback got the Tigers the tie as both teams put together program records and Florida secured the SEC regular-season title.

The top SEC meet of the weekend started off with a bang. Both squads got off to solid starts in rotation one.

Auburn took to the vault and the energy was electric in Neville Arena. Junior Cassie Stevens put together a near-perfect 9.975. The career-high for Stevens launched the Tigers to a solid 49.500 on vault.

Florida suffered a minor setback to start their bars rotation when freshman Riley McCusker fell off the bars and took a major deduction. Fortunately for Florida, the remainder of the lineup nailed their routines. Freshman Leanne Wong ended the apparatus with a team-high 9.950 to put the Gators at 49.525 to open the night.

Gators took the lead by just 0.025 after the first rotation.

For the Gators, It was another day, another 10.0 for Florida’s Trinity Thomas. The senior stepped up to the end of the runway and took off on her vault. With her legs stuck together and no bounce on the landing, Thomas got her second perfect 10 on vault this season.

Freshman Sloane Blakely and graduate student Megan Skaggs both put up 9.950s as Florida counted only 9.900s and above. Thomas and the Gators put together a huge 49.725 in the second rotation.

The Gators expanded their lead and went into the second half of the competition up 99.250-99.050.

Perfection for the Anchors

Rotation three proved to bring out the best in both teams.

The Tigers put together a textbook rotation on the beam. Reigning Olympic all-around gold medalist Sunisa Lee earned her second consecutive perfect score on the apparatus. Lee’s score helped Auburn get a 49.725 on the balance beam.

Thomas took a rest on the floor, but Florida still found its 10.0.

While the Auburn crowd celebrated Lee’s 10.0 on the beam, Blakely kept her composure and closed out the floor exercise with her first career 10.0. Florida got an outstanding 49.750 on the event and continued to expand their lead ever so slightly.

Up by 0.225 going into the final rotation, Florida went to beam while Auburn took to the floor.

Skaggs opened for the Gators with a 9.925. An early mistake from Auburn’s Sara Hubbard put a 9.725 on the board for the Tigers to open the final rotation. It appeared to be an early break for Florida; however, a few big balance checks from Blakely got her a 9.825 and the Tigers responded with consecutive 9.925s from fifth-year Drew Watson and Stevens. Both were career-highs.

Florida and Auburn exchanged 9.975s (Sophia Groth, Thomas, Lee) until senior Leah Clapper took an unfortunate fall on her signature event. The big mistake meant Blakely’s score would count and gave Auburn one chance at coming back and getting a tie:

Senior Derrian Gobourne was forced to wait due to a delay with the music, but when the senior eventually took to the floor, she executed with absolute perfection. The clutch performance brought the Tigers all the way back in the final rotation to tie the meet at 198.575, a program record for both teams.

Florida finished off its third straight undefeated season in the SEC and secured the conference regular-season title.

There were four 10.0s on the night. Thomas took the vault title with a perfect score while Lee won the balance beam with a 10.0 of her own. Blakely and Gobourne tied on the floor with 10.0s. Wong and Lee tied on bars with the near-perfect 9.950.

Lee won the all-around after earning a 39.800, the third-highest all-around in the country this season.

The Auburn Tigers will head to Ann Arbor, Michigan on March 12 for a tri-meet with the Wolverines and West Virginia. Florida will travel to Raleigh, North Carolina for a quad-meet with Penn, Rutgers and NC State on Friday.

Chris Will is a second-year journalism student with a focus in sports and media. Originally from the Fort Lauderdale area, Will is now the beat reporter for Florida Gymnastics and covers all things sports in Gainesville.
@_Chris_Will_
Previous Gators Women’s Basketball Falls in SEC Quarterfinals To Ole Miss
Next Gators Men’s Basketball Falls to Kentucky on Senior Day