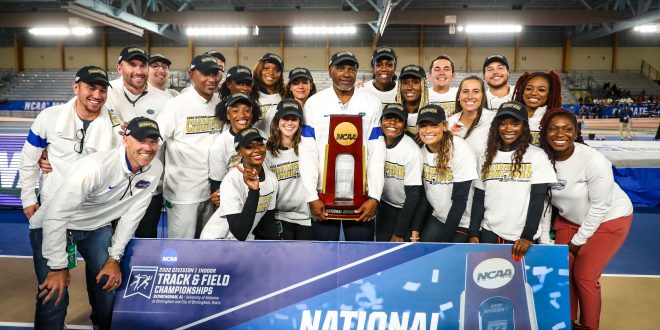 The Gators Women’s Track and Field claimed their second national championship in program history on Saturday at the 2022 NCAA Indoor National Championships. The Gators totaled 68 team points in the tournament.

FLORIDA WINS IT ALL!

Jasmine Moore became the first woman in NCAA history to win conference and national titles in both the Long jump and Triple Jump in the same season. She broke a personal, school and NCAA record on her first attempt at the triple jump marking a 14.57m. Natricia Hooper came in right behind at second place and scored eight points for her 13.99m finish.

Jasmine Moore was named the SEC Female Athlete of the Year after she dominated through the season and becoming an NCAA leader.

Then, Talitha Diggs grabbed first place in the 400 meters scoring a personal best of 50.98. Her time marks the second fastest in school history. Grace Stark added to the team success by scoring first place in the 60-Meter hurdles with a 7.78 time stamp. Stark’s score was also her personal best and school record. Stark also added an additional five points scoring 4th in the 60 meter.

Parker Welch is a Senior at the University of Florida majoring in Sports Media at the College of Journalism & Communications.
@parkerrwelch
Previous Softball: Gators drop game Sunday
Next Women’s 2022 NCAA Tournament is set

On Saturday, the Gators Women’s Track and field team made history. Florida came in at …