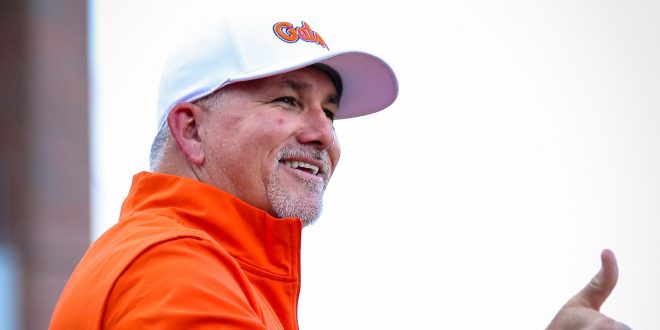 Florida Gators softball took the series win over Mississippi State with a 3-0 victory on Monday night at home. This would be the No. 4-ranked Gators’ first SEC series win of the season over the Bulldogs. Florida has won 10 consecutive SEC regular season series dating back to 2020.

Freshman Kendra Falby put the Gators on the board after she slammed an inside-the-park homerun. Falby blasted a ball from Mississippi State pitcher Aspen Wesley to left center field and showed her speed around the bases to give the Gators a 1-0 lead.

Hannah Adams walked to first and then proceeded to steal her 12th base of the season. Adams was brought home by Skylar Wallace’s opposite field home run. The Gators hit two homeruns in the same inning for the 4th time this season. The Gators pulled ahead to a 3-0 lead.

Elizabeth Hightower, a senior right-handed pitcher from Monticello, FL, tallied her 11th career complete-game shutout. Hightower struck out three and only allowed one walk with four hits over the period of seven innings.

This complete-game shutout was the first of the season for Hightower and the first since she posted a no-hitter against USF in the NCAA Gainesville Regional.

The first game of the series with Mississippi State ended in a Gator win, 8-4. Then, the Bulldogs took the second game on Sunday, posting one run against the Gators scoreless game. The Gators shutout the Bulldogs in the final game, clinching the series.

What’s Next for Gators Softball?

The Gators have a 23-2 record thus far this season, with a 2-1 conference record. Up next, Florida softball is headed to Deland to take on the Stetson Hatters at 6 p.m. This weekend, the Gators will see their second SEC regular season series on the road against Texas A&M. 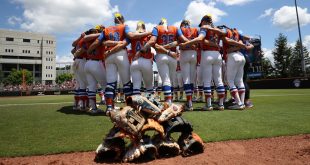