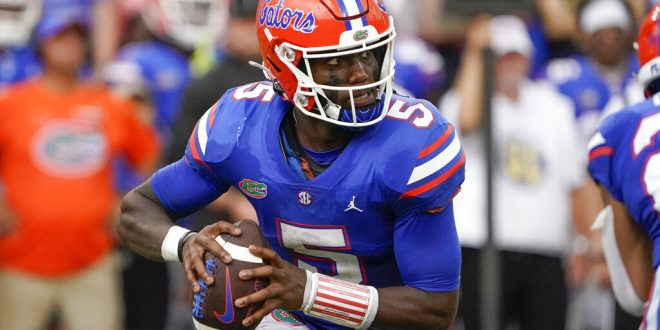 College football is back, and so is Emory Jones.

And despite the rumors, Florida quarterback Emory Jones has remained with the Gators and suited up for spring practice.

In December, reports surfaced that Jones would be entering the transfer portal after the Gators’ bowl game against UCF. None of that ended up happening, but it doesn’t mean he wasn’t close to leaving.

The Return of Jones

It came as a surprise to fans when they heard Jones would not be leaving for another program.

Jones said his return to the Gators wasn’t always a certainty but that the coaches recruited him to come back. He was open with the media and said he went into the talks with the new staff telling them he didn’t want to come back.

“I was really close [to transferring],” Jones said. “Coach [Billy] Napier and Coach [Ryan] O’Hara sat me down. A lot of the offensive guys sat me down and basically said they went through my film and said they really were excited about things that I had done, and they think they can make me a way better player than I’ve shown. Basically, I just want to give them a chance.”

He said getting a degree from the University of Florida also played a large role in his decision to remain with the team.

No matter what Jones decided to do with his future, a new system was around the corner. By sticking with the Gators, he now gets to learn head coach Billy Napier’s system.

With Napier in charge of the quarterbacks, Jones will have his head coach right over his shoulder throughout the learning process.

3/15 Spring Practice: Running back @Bowman_22 with the catch out of the backfield from quarterback @eXjones6, with @coach_bnapier looking on.

Jones has faced heavy criticism from fans and the media about his play last season. He said he believed transferring would have given him a new start in a new environment. However, the new coaching staff has shown Jones that a new culture is possible in Gainesville.

“I definitely feel positive vibes,” he said. “Just positive energy and light from those guys and I’m excited to see what we do

He said he’s excited to be back out on the field and said now it’s just a matter of getting comfortable with the new faces and new terminology.

Just because Jones is with the Gators now doesn’t mean he will still be there when the fall season comes around. The option to transfer is still on the table if Jones wishes to do so, but he said he’s with the Gators right now and that’s all he’s concerned about.

“I’m committed,” Jones said. “I’m here. I’ve been working my butt off this offseason, trying to get close with all the guys around here and for this team.”

Jones returned to a crowded quarterback room that includes Anthony Richardson and Ohio State transfer Jack Miller. With a new staff and a new year, the quarterback competition is wide open.

Florida’s spring game is on April 16 at 1 p.m. and for those looking far enough ahead, the Gators open the season against Utah on Sept. 3.

Chris Will is a second-year journalism student with a focus in sports and media. Originally from the Fort Lauderdale area, Will is now the beat reporter for Florida Gymnastics and covers all things sports in Gainesville.
@_Chris_Will_
Previous Kuzmicki’s and Szlachetka’s Late Game Heroics Seal 8-7 Victory for Oak Hall
Next First Ever NCAAW Play-In Games