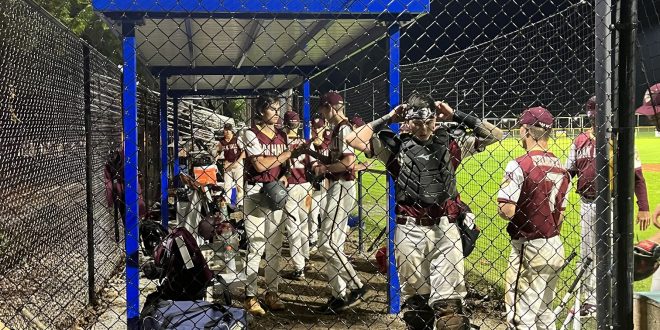 The Oak Hall Eagles took home a win in a nail-biter on Wednesday night against the P.K. Yonge Blue Wave. The game featured plenty of action from the first pitch to the final at-bat. Sophomore Ethan Szlachetka got the win with 3.1 innings pitched, two hits, one run, and six strikeouts. Szlachetka also racked up three hits of his own on the offensive end, making him one of four Eagles with a multi-hit outing.

Junior Neil Ruth hit two singles on the night while racking up three stolen bases. He also hit a sacrifice fly to bring in what would end up being the game-winning run. Junior Jack Kuzmicki hit two doubles and drove in three runs. Sophomore Jackson Beach racked up two hits of his own while driving in two runs.

Early Offensive Fireworks for Both Teams

Both teams got on the board with one run each in the first inning. The Eagles starting pitcher, Troy Freeman, knocked in an RBI single of his own at the top of the inning.

However, the game really started to heat up in the second inning. Beach and Kuzmicki hit back-to-back two-RBI doubles to open up a four-run lead for the Eagles. Beach mentioned how the team focuses on always starting off strong in the early innings.

…In the following at-bat, Jack Kuzmicki launches a double of his own to drive in another two runs. The Eagles lead 5-1 midway through the second inning. pic.twitter.com/yIlKMgb6B2

“Coach always tells us every game to get hot early,” Beach said. “It just sets the tone for the game, which is really important.”

However, the Blue Wave were not deterred by the Eagles’ hot start. They responded with a three-run second inning of their own, followed by two more runs in the fourth inning. Andrew Dawson and Lane Sparkman served as the catalysts of the Blue Wave’s offense. Dawson racked up three hits, while Sparkman drove in two runs. By the end of the fourth inning, the score was tied at 6-6.

Down to the Final Inning

The fifth and sixth innings did not see much action on the offensive end. Both teams had inserted relief pitchers in the fourth inning. Szlachetka had taken the mound for Oak Hall, while Aidan Mansfield came in for P.K. Yonge. Szlachetka had multiple close calls with runners in scoring position, but he managed to get out of those jams. Meanwhile, the Eagles’ offense had ground to a standstill, with multiple baserunners being picked off and caught stealing.

With the score still tied at 6-6, it all came down to the seventh inning. Beach started off the inning with a single. Kuzmicki stepped to the plate, knowing he had the opportunity to give the Eagles their first lead since the fourth inning. With the stakes as high as they could get, he stayed calm and kept a clear head as he prepared to swing.

“If you’re thinking too much, you can’t really perform,” Kuzmicki said. “There’s really no pressure, if I get out, I know the guy behind me will succeed.”

Kuzmicki proceeded to blast a powerful double that brought Beach from first base all the way to home plate. The Eagles had finally broken the stalemate and had taken the lead. One at-bat later, Neil Ruth sent a pop fly into the outfield that brought Kuzmicki home, giving the Eagles an 8-6 lead.

KUZMICKI FOR THE LEAD! Jack Kuzmicki hits a powerful double to bring Jackson Beach home all the way from first base. Eagles have taken a 7-6 lead with no outs at the top of the seventh inning. pic.twitter.com/GmAFHjUePU

Holding Out For A Hero

With a two-run cushion, it was up to the Eagles’ defense to put the game away. It was not an easy task, as P.K. Yonge’s Andrew Dawson started the inning with a triple; his teammate Alexander Sanetz hit a double one at-bat later that brought him home. With the Blue Wave one run from tying the game, the Eagles knew they needed to crush this momentum. Moments like these are when big-time players make big-time plays, and Wednesday night was Szlachetka’s moment.

With a man in scoring position, the Blue Wave were one well-hit ball from a tie game. As Cody Cellon stepped to the plate for P.K. Yonge, the atmosphere was as tense as it gets. With the crowd (and the P.K. Yonge dugout) roaring at the top of their lungs, Szlachetka composed himself. He remained confident in himself and in the knowledge that his teammates would have his back in the coming at-bats.

“[Baseball] is a great game, because you have eight guys behind you. They’re always going to defend you, everything you do,” Szlachetka said. “That’s what helps me, trusting in my defense and trusting in my players.”

Szlachetka went on to strike Cellon out, much to the dismay of the Blue Wave crowd. They still had one out remaining, and their final batter, Cole Thompson, did not go down without a fight. With the count at 2-2, Szlachetka threw a pitch right down the middle. The crowd went silent with anticipation for the call. The umpire signals a strike. Game over.

The Eagles dugout immediately went into celebration mode. With Wednesday night being only their third game of the season due to multiple rainouts, a hard-earned victory like that tasted even sweeter.

Wednesday’s victory left Oak Hall Head Coach Kevin Maris with plenty to smile about. He specifically praised Ruth’s impressive base running and Szlachetka’s clutch pitching. However, he was also proud of his squad’s performance as a whole.

“The guys put in their time at practice, and they work hard,” Maris said. “This team is showing that they don’t quit, and they’re ready to compete until the last out.”

The Eagles only having played three games in the last 22 days due to multiple rainouts. Despite this, the team already looks much more cohesive than they did in their season opener. They will finally play their home opener this Friday at 4:15 p.m. against the Bronson Eagles. With two consecutive wins under their belt, the team will hope to keep their momentum going in what looks to be a promising start to the season.

Jack Meyer is a first-year student at the University of Florida. He is majoring in Journalism and specializing in Sports and Media.
@jackmeyerespn
Previous Buchholz Baseball Holds Off Comeback Colts, Defeats North Marion 11-7
Next Emory Jones Discusses Decision to Return to Florida